Samsung continues to raise the bar 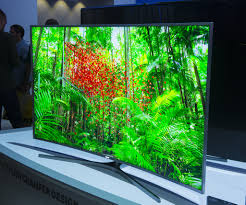 The global television industry has experienced many revolutionary innovations. Each year, TV manufacturers come up with new terms to define their latest technologies.  Consequently, it has increasingly become hard and confusing to predict the future of television industry.

In the last few years, innovation has largely been around bigger screen sizes, curved and ultra slim form factors, improved picture quality, as well as strengthening of the various Smart TV platforms.

Analysts say any good television is going to come from manufacturers who will not only offer strong image quality but also guarantee reliability.  Already, manufacturers are angling themselves by launching products targeted at the expanding middle class.

Samuel Odhiambo, the Manager Product Marketing-Visual Display at Samsung Electronics East Africa, says innovation has been one of the key drivers behind the growth in the global television market.

The past decade was one of manifold milestones for Samsung. From the release of its elegant Bordeaux TV in 2006 and the world’s first LED TV in 2009, to creating a new generation of Smart TVs in 2011 and the world’s first curved UHD TV in 2014, the South Korean company has continuously raised the bar with its revolutionary products.

The company’s recent move into the electronics arena is a TV that the company says promises to “bring action into life”.   Early this year, the company made public a line of four Ultra-High Definition TV sets that it calls the SUHD which, according to Odhiambo, highlight two major trends.

First, he says, is the fact that the company is betting on high-dynamic range (HDR) technology which is used in imaging and photography to help images pop up by increasing image contrasts.  Secondly, the new line underscores Samsung’s commitment to Internet of Things (IoT), a concept that allows products or home appliances to connect wirelessly.

Ultra HD or 4K refers to a set with a minimum resolution of 3840×2160 — four times as many pixels as Full HD and eight times as many as SD. The new TV series which all fall under the KS9500 series, feature the world’s only cadmium-free, 10-bit Quantum dot display, providing the most true-to-life picture quality and colours ever offered by Samsung.

Quantum dot is the latest in display technology that uses microscopic particles to create brighter, more saturated and more accurate colours compared to other displays in the market currently.

“Generally, quantum dot technology offers a purer source of light, meaning less filters, less heat and power use, to deliver the range and intensity of colours that could only be previously provided by nature.”

Compared to its predecessor technology, the OLED TVs, the new SUHD offers twice the brightness.  The new units also come with curved screens and a new design with no edge around the display. Curved TVs, explains Odhiambo, have the ability to cut down on ambient light reflections. The Smart Hub interface also allows users to access content as they turn on the TV.

The SUHD TVs are also powered by Samsung’s Tizen SmartThings platform that lets one connect all ‘smart’ devices in the home. “We (Samsung) are defining what television is now and what it will be in the future. As such, IoT hub technology has also been applied to the television, allowing the device itself to connect with over 200 SmartThings-compatible devices and act as the controller for the entire smart home.”

For instance, with an outdoor camera connected to their Samsung Smart TV, people can check when visitors arrive and choose to open their front door, directly from their sofa.  Motion sensor alerts can also pop-up directly on the TV screen if movement outside the home is picked up, providing more security and peace of mind, whether at home or away. Users can also stream UHD movies from their providers. The SmartThings application’s Cinema Mood also makes it easier to adjust ambient lighting and surrounding sound. The units also come with remote control devices that automatically recognise and control other devices connected to the television such as home theater systems or game consoles.

However,  Odhiambo admits that one of the challenges to this technology could be broadband connectivity, especially in the sub-Saharan region.  Internet services have not been satisfactory across the region, with people complaining of cost, unavailability and poor connectivity.

The other challenge is the availability of content for the SUHD forma,t which Odhiambo says could derail the uptake of SUHD TV. However, he remains optimistic that in the next few years more content will be available.  “We have already seen a number of content producers gearing to produce more content.”

It is estimated that by 2020, the African consumer market will be worth US$1 trillion. This will be driven by demand for technology-based goods such as home appliances.

Odhiambo concludes that the growing middle class in Africa will be good for technological companies such as Samsung.