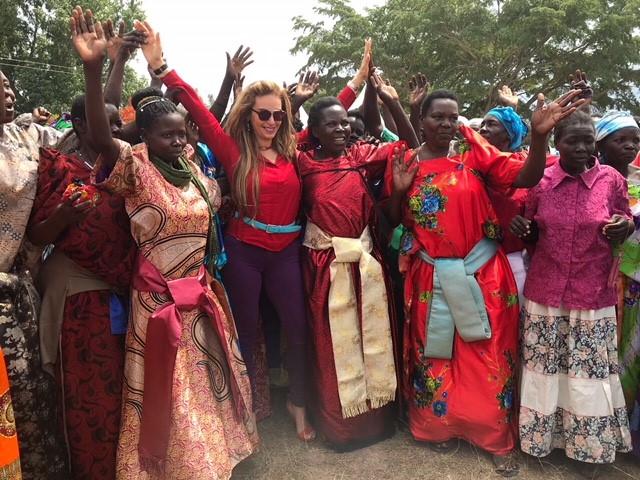 Kelej’s passion and enthusiasm for women in Africa is contagious and endless. The Egyptian born, award-winning community builder, is pioneering change when it comes to women’s health especially, how infertility is viewed in Africa.

For about two years now, the pharmacy graduate from Alexandria University, has been heading up the Merck Foundation, a charity organization she help set up in 2012. Her main mission has been to bring hope and empower women who are discriminated and looked down upon for their inability to have children.

Kelej says she noticed that in most parts of Africa, women are solely blamed for infertility. This is despite the fact that both men and women are equally affected by it. “Women who remain childless are seen as burdens on the socio economic well-being of the community. Their husbands will often marry another wife leaving them isolated, hopeless and purposeless.”

Although data on the cases of infertility is scanty, a report by the World Health Organization released in 2016, reported that one in every four couples in Africa is infertile. This translates to about 180 million couples on the continent. Further, around 85 per cent of the infertility is caused by untreated infectious diseases which arise as aftermath of practices such as genital mutilation, unsafe abortion, unsafe delivery, Child marriage and STDs.

For the last six years Kelej has been the orchestrator of the ‘Merck More Than A Mother’ program run by the Merck Foundation. The initiative specifically aims to empower infertile women in Africa by delivering infertility awareness, prevention and treatment initiatives addressing medical, financial, social and emotional challenges for African women.

The 46-year-old Kelej, believes that providing access to infertility care is important. She emphasizes that it is even more important to intervene to decrease stigmatization and social suffering arising from the condition. “Stigma extends to the wider family including parents and in-laws who are deeply disappointed by the loss of continuity of their family.”

Kelej says that over 1,200 infertile women in Kenya, Uganda, Nigeria, Ghana, Tanzania, Central Africa Republic, Ethiopia, Liberia, Tanzania, Niger, The Gambia and Cote D’Ivoire who no longer can be treated, have been empowered socially and economically to lead independent and happier lives through ‘Empowering Berna.’  The ‘Empowering Berna’ initiative aims to empower underprivileged infertile women and help them establish their own small business and build independent lives.

In east Africa currently, the cost of treatment for fertility is very high, and this is due to the massive gap in demand and supply of fertility care in Africa. There are a handful of skilled embryologists and fertility specialists with most practising in the private sector.

Merck Foundation has partnered with Uganda’s ministry of Health to train personnel at their first public IVF clinic, which is built to provide services for East Africa. Kelej reveals that the Foundation plans to roll out the initiative in Tanzania. The goal will offer unique clinical and technical training for the first public IVF in Tanzania similar to the one the foundation runs in Ethiopia.

Kelej says over the years, the Foundation has grown in leaps and bounds. “Initially everyone told me it will never pick up as infertility issue is not important for Africa since it is overpopulated and have other pressing issues such as HIV, hepatitis, STDs and so on. I persisted with the push to set up the campaign. I did this with the support of Merck Chairman and Merck CEO who both believed in the critical need to address this issue in Africa.”

Kelej who always dreamt to be a pharmacist and a film director, says it has been impressive that leaders both men and women, governments, community members and media experts rally behind the cause once. This is after understanding the magnitude and social consequences of infertility stigma in Africa.

Infertility is an area that most men in Africa rarely talk about, they are mainly bystanders in the whole period or process. Kelej says it is time to end misconceptions and replace them with empathy, understanding and facts. “Men in Africa are very kind, once they realize the scientific facts that show that infertility has nothing to do with their sexuality, they support the idea of getting tested and start to deal with the society and family pressure on themselves and their wives.”

Merck Foundation launched a campaign dubbed #menToo that encourages men to boldly speak out. Kelej says the result has been impressive with political leaders, the media and healthcare professionals and supporting the campaign by becoming ambassadors of Merck More than A Mother.

Kelej says there is a need for artificial reproductive technology to be made a priority in Africa. This will ensure that women have the right to easily access treatment using different technologies as well as other aspects of adaption, egg or sperm donations surrogate mothers she believes this will protect both women and men from any kind of abuse. “Infertility is often seen as a treatable problem for the upper-class primarily because the poor cannot afford the basic healthcare alone leave alone treatment such as ART.

Merck Foundation has also provided for more than 50 candidates, three to six months clinical and practical training for fertility specialists and embryologists in more than 15 countries across Africa and Asia.

For Kelej who out of choice chose not to have children says the highlight of her life, is seeing women stronger, happier and with self-confidence. The reassurance that they are still important and valuable whether they are mothers or not.  “This compensates all the effort and time I spent away from my family trying to realize Merck foundation’s vision.”

The Airbnb factor in tourism