What does it take to increase Rwandans involvement in capital markets? 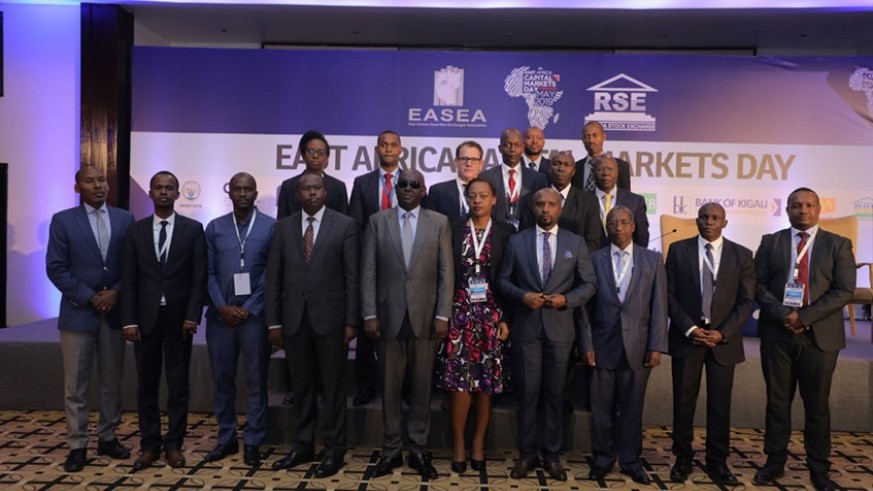 There is need for strategic, awareness and education campaigns targeting the general public to ensure that more Rwandans save by buying shares in companies listed on the stock exchange and that investors can raise capital by selling their shares on the market, financial experts have said.

Capital markets play an important role in mobilising savings of individuals or companies with the expectation of high returns so that the money is loaned to others in need of funds for long-term projects implementation especially through stock exchange and treasury bonds market.

Rwanda Stock Exchange started in 2011 with the aim of creating a savings and investment culture.

Pierre Celestin Rwabukumba, the CEO of Rwanda Stock Exchange said that the number of people who buy shares and companies that sell shares on the stock exchange are still few.

“So far, we have just over 19, 000 people on capital market, companies that sell shares are also still few,” he said adding that, “the number must grow at least by 20 per cent every year.”

He said this could be possible thanks to a recently adopted Ten-Year Capital Market Master Plan to guide further development.

“Capital market in this region is yet to be embraced by many people. People are still using their traditional way of saving such as buying land, cows which they physically see and they are yet to understand what buying shares means,” he said.

Even telling companies to bring people to buy shares in their business is still facing challenges with a poor mindset that people will steal their company,” he noted.

Rwanda recorded 8.6 per cent growth in 2018 and Rwanda Stock Exchange played and continues to play a central role in this economic growth.

“We want to simplify the message, language and regulations and educate the general public and explain that saving is not only done by depositing money in the banks, buying properties but also buying shares on capital market. We want that companies understand the role of increasing shareholders to make their companies grow through selling shares to other people. We think of technologies where people can even buy or sell shares via their mobile phones,” he said.

James Ndahiro, the Chairman of Rwanda Stock Exchange said: “I encourage brokers and players in the sector to be proactive and let us educate the people. I would happy if the participation has moved to at least between 60 and 80 per cent. There is need for a collaborative approach so that our economy can be funded through the system.”

Dr. Uzziel Ndagijimana, the Minister of Finance and Economic Planning said that the capital market sector has seen Rwanda registering remarkable improvements in terms of financial inclusion of 89% during the period of 2012 to 2016.

He explained that East Africa’s region is the fastest growing economy in Africa with GDP growth of 5.7 per cent in 2018 compared to African average growth of 3 per cent.

“These countries are involved in the implementation of national development plans, sustainable development goals and African Agenda 2063 and they need capital market as source of funding. Funding these plans requires a combination of various sources of financing resources, including assistance from developed countries.

“It also requires to increase domestic resources mobilization and third increase private sector investments. In this context, capital development in our respective countries is paramount importance,” he said.

Capital markets contribute to the mobilization of resources both domestic and foreign from long-term investments by providing opportunities for the public to invest their savings in securities with high returns. They also contribute to job creation .We need to build strong network in capital markets in our region, he added.

He said that the enterprises that join capital market must have good management to attract trust from people to buy shares and that they have experienced more individual people buying treasury bonds.

Rwabukumba added that SMEs should be hand-held to become better companies and then later on they can come on the market.

“At Rwanda Stock Exchange we have a technical desk to support SMEs raise long-term funds from the capital market,” he said.

This means that SMEs can gain capital markets from sources alternative to financial institutions according to Maurice Toroitich the Managing Director of BPR Plc.

He said regulators, stock exchanges and policy makers should work together to address challenges SMEs are facing to raise long-term funds from the capital market.

Eric Bundugu, the acting Executive Director Capital Market Authority said that it requires to help SMEs in learning vital processes and opportunities which can help them get more capital.

“The capital market is an avenue that SMEs should consider but also remember that it also comes with requirements and understanding what needs to be worked on. SMEs can raise long-term capital on the local capital market, and on our side we are educating them on how they raise funds through the market,” he said

SMEs play a major role in contributing towards long-term economic growth and creation of employment.

However, SMEs often face limited access to financing partly because of the relatively higher risks associated with investing in them.

Other initiatives such as tax incentives and government guarantees have also been introduced to encourage access by SMEs to capital markets.

Statistics show that recently, the financial markets and particularly the capital markets have largely contributed to the domestic economies and are now heavily involved in strategic developmental plans in their respective countries.

For instance, in Kenya, the largest economy in the EAC region, the equities market stood at 27 per cent to the nominal GDP in 2018 while the market capitalization of Rwanda’s bourse, the RSE stood at 42.03 per cent of the country’s GDP in the same year.