Despite her dream being shuttered every time she started a business, it was never too serious to pick up the broken pieces and start again 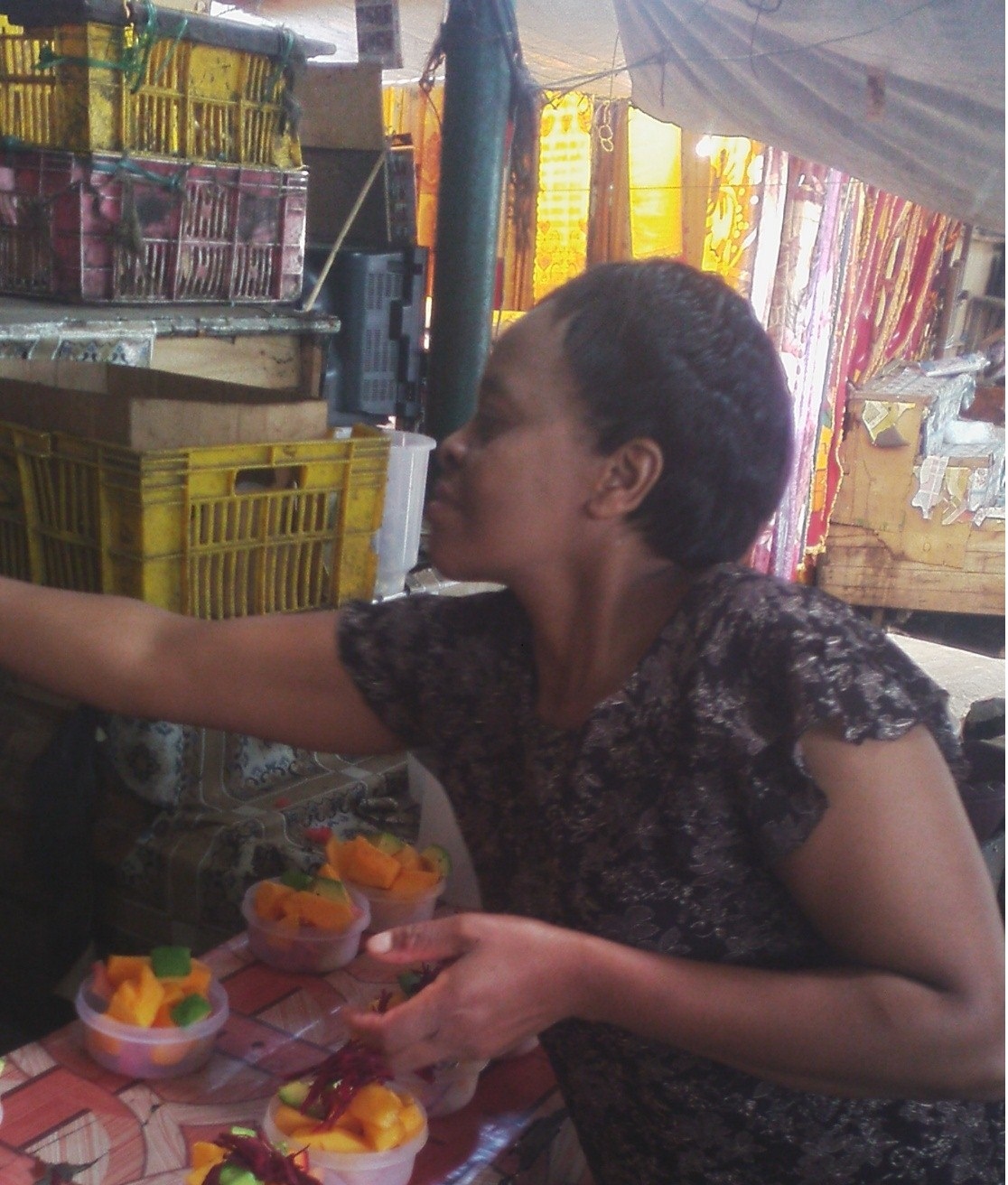 Under the red colored shelter, inside the Muthurwa market in Nairobi, is Jane Wambui. She sits on pilled stones, her head buried in her hands, waiting for customers to come and destruct her from the deep thoughts. The 28 year old and a mother of two is wondering; trying to calculate, where possibly she could have gone wrong in her life.

A wise man would think of keeping his family happy by bringing the whole family together for dinner, but for Jane, things didn’t work out as she thought.

While in form three at Precious Blood Riruta, Jane was defiled by a person she says she had never imagined. Her uncle was then working with the Kenya defense forces and had come home to visit Jane’s family.

Unfortunately, during his visit, no one was there. She says that her uncle took advantage of the situation and defiled her. When she explained the matter to her parents, no one would believe that a man of such dignity would ever do such an imaginable act.

“My parents thought I was lying, possibly because we were from a humble background and nothing would happen.” She says.

In 2008, Jane gave birth to a child she says, belongs to her uncle. But that would not solve any issue but to put the states worse.

“My father said I was adding a burden to our home since we are seven” she say, “and that I was wasting the money he would have used to do other things with, for my school fees.” She adds. Jane was then sent away by her father in the name of ‘she should take the child to its father’

She pleaded with her uncle. In order to clear the air, he decided to claim a sponsor hence sent Jane’s child to a children’s home as he paid for Jane’s school fees. She completed her studies and joined University of Nairobi in 2010.

As if that was not enough, in her first semester, pursuing a Bachelor of Science in Hospitality and tourism management, she got pregnant for a student. This lowered her hopes with life as the financiers of her education decided to suspend her scholarship.

However, she had no otherwise and her living in Nairobi, away from home meant something different. Her then boyfriend had denied responsibility and Jane had to look for ways to provide for herself

“When I told him that I was pregnant with his baby, he chased me out of his house. He was a third-year student and I had nothing and nowhere else to go” she narrates. Jane decided to look for jobs and got one from her fellow students.

She started washing clothes for her fellow students on pay. She says, “I washed clothes for students, washed their houses and even for some who had kids, would look after their kids as they attended classes.”

However, this did not last for long. Time was due and she was yet to deliver. Her parents were worried of her whereabouts and decided to look for her. Luckily she was found at Kenyatta National Hospital, safely with a new born baby.

Her parents were upset, but there wasn’t anything they could do. Jane was taken back home to Maragua where she started selling fruits and vegetables. In 2015, Jane came back to Nairobi to extend her business after a friend notified her of job opportunities.

She was then recruited to a women’s group organized by Muthurwa Young Mothers (MYM). That was when she realized she could pick up the broken pieces and start again.

From the little capital she had, Jane went back to preparing salad and selling fruits. The business got well and she could be able to even send money home.

“I started selling fruits and at the end of the day I would make about sh.2000. I would save sh.500 and send about sh.500 home. The rest I used for my needs.” She says. Jane found shelter of peace but hard work within Nairobi’s busy market.

After ensuring that her business was catching up well, Jane decided to enroll herself for a course at the Kenya Institute of Professional Studies. She could however not be able to raise the fee and sought for scholarship.

However, it didn’t work out for her after finding out that her scholarship would not cover up for all the cost the institution demanded. She hence decided to go back and thrive in her business to ensure ends meet.

“I saw it fair to come back here because the scholarship was just half and I could not raise the other half. I missed the opportunity. I could not go back home to ask for my parents to give me money for my studies as I fear to ask for money from people.” She explains.

Jane has worked from doors to doors, hoping to find an opportunity that would give her a chance again to complete her studies. While all other doors are closed, Jane has employed three other ladies whom she says, help her in selling the fruits in case of a high demand.

Agnes Wanjiru, 17, says it is fun working with Jane: “She acts like a mother; I learn the strength and the passion of doing something. Jane is a go-getter and that’s what I want to be.”

Jane has saved through chamas more than ksh. 30000 and hopes to continue saving. She says that if it were possible she would tell other ladies not to follow her steps as it is dangerous and disastrous.

“I pity most ladies, they are victims of a lot but they should not follow what I did. If I could, I would let my life be an example to someone else.” Jane says

However, life could be one hell without determination and free will. From where she sits, it’s possibly a thousand miles from where she is mentally. Reason? As she continues with her daily routine, she still hopes that a day will come and her life will change for the best.