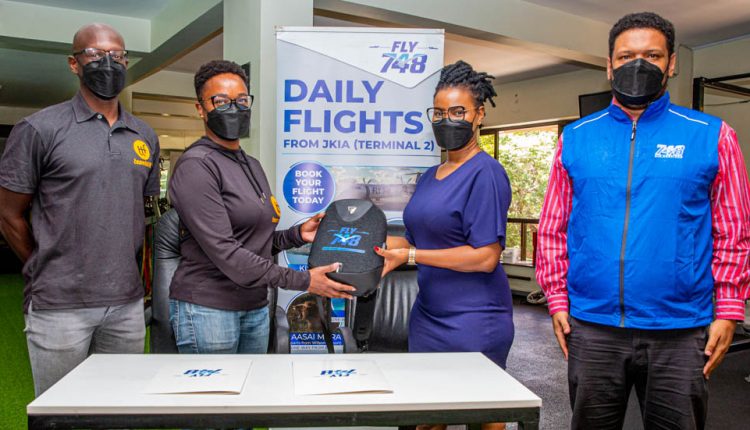 Renowned airline, Fly 748 has entrenched its commitment to development of the sports industry as it signs partnership with a dynamic endurance sporting group, Team Tri Fit (TTF) to grow and mainstream triathlon athletics in the country.

The airline has today announced a partnership agreement that will offer subsidized air-tickets to TTF members and participants who will take part in upcoming triathlon events, starting with the TTF Chale Island Triathlon Challenge scheduled to take place in Diani, Kwale County later in May.

“We are delighted to partner with Team Tri Fit for their Chale Island Triathlon Challenge slated for the 29th May 2022 in Diani, Kwale County as we continue to make a significant contribution to development of sports in the country,” said Fly 748 Schedule Services Manager, Alijan Merdin.

Team Tri Fit is a dynamic endurance sporting group that brings together amateur and professional athletes who have a desire to compete and nurture the triathlon.

In its five year plan the 65-membership sporting group seeks to develop triathlon and duathlon and increase uptake of its activities amongst Kenyans to 700 participants by 2025.

As part of its plan also TTF seeks to “Increase investment in triathlon sports in Kenya through public and private partnerships by 50 percent by 2025.As a result, I call upon   stakeholders to support our efforts in promoting and growing triathlon in Kenya,” said Michael Orwa, Team Manager,TTF.

This partnership is in line with the airline’s strategy of revolutionizing air travel in the country to enable more Kenyans to take it to the sky through competitive pricing.

The partnership comes barely a month after the airline sponsored the Kenya Police Football Club to the tune of KSh 6 Million.

The partnership was sealed at TTF Offices located at the CourtYard in Lavington.