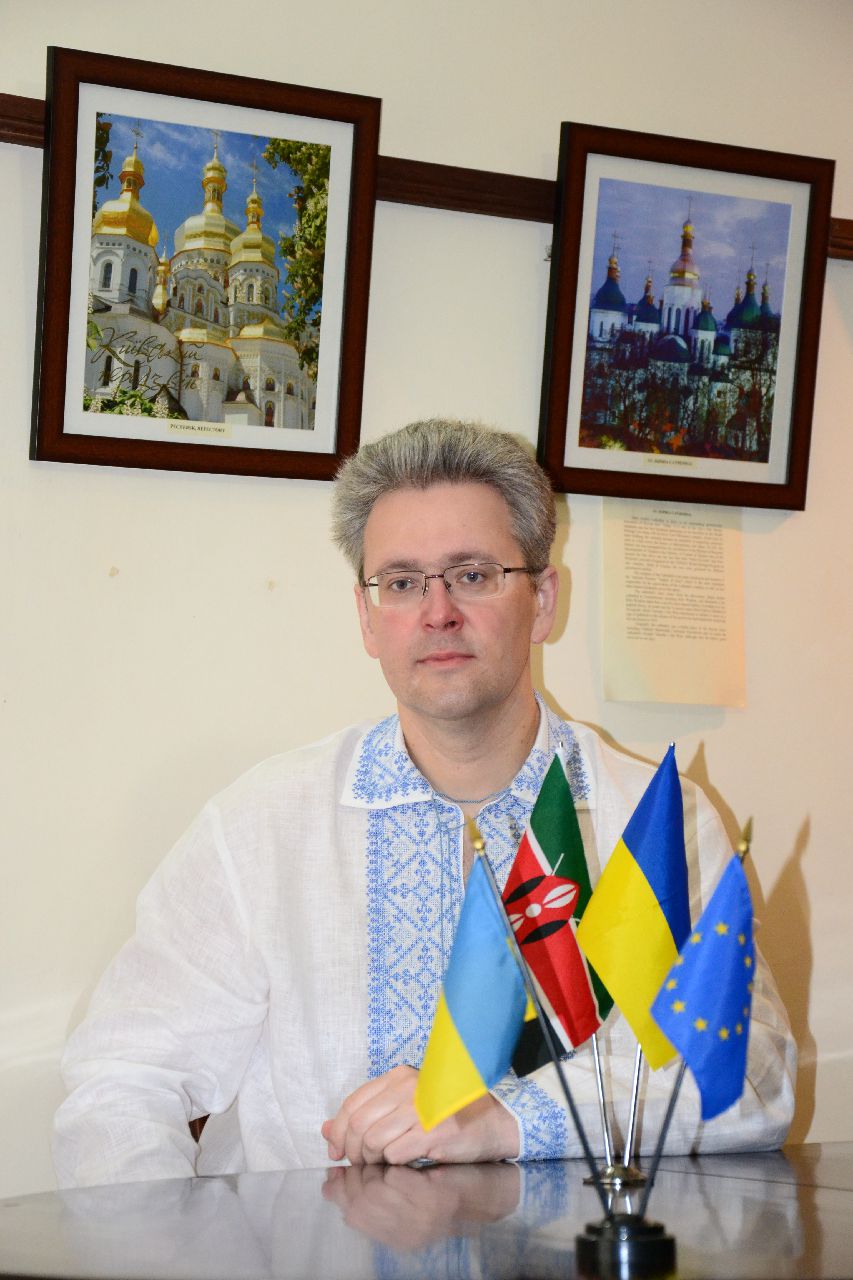 Yevhenii Tsymbaliuk started his career at the Ministry of Foreign Affairs of Ukraine in 1993.  The 45-year-old father of one has worked in Finland and Austria as a Member of the Permanent Delegation of Ukraine to the Organisation for Security and Cooperation in Europe. He has also worked in New York and many other countries across the world. He is currently the Ambassador of Ukraine in Kenya, a position that he holds dearly.

East African Business Times Magazine’s Boniface Otieno Kanyamwaya caught up with him in his office in Nairobi last month where he engaged him on a number of issues ranging bilateral cooperation between the two countries, areas of the economy where the Embassy of Ukraine in Kenya focus on in provision of monetary and capacity building, trade volume between the two countries among other issues. Excerpts;

Q; How long do Ukraine and Kenya diplomatic relations date back?

Kenya recognized Ukraine as an independent country on March 5, 1993, diplomatic relations were established on the same day. I am proud of the strong historical relationship between our countries and the balanced relationships in political engagement, in economic development and in development cooperation.

Q: Which areas of the economy does the embassy of Ukraine in Kenya focus on in provision of monetary or capacity building?

Kenya is the leading trade partner of Ukraine in Eastern Africa.

Despite today’s difficulties caused by the Russian aggression in Ukraine our country has implemented a number of reforms and its economy has started to grow again. We see great potential in further development of Ukrainian-Kenyan cooperation in the trade and economic sphere and are interested in the reviving of the previous volumes of trade turnover.

As a practical step towards the extension of our trade relations, on December 2016, a business delegation of Ukraine headed by Mrs. Nataliya Mykolska, Deputy Minister of Economic Development of Ukraine along with Mrs.OlgaTrofimtseva, Deputy Minister of Agrarian Policy and Food of Ukraine paid a visit to the Republic of Kenya. The said delegation included the representatives of the leading and prominent enterprises of Ukraine in agriculture, pharmaceuticals, food products, and machinery. Members of the Ukrainian delegation met with the high-level officials of Ministry of Agriculture, Livestock and Fisheries, Ministry of Health and Ministry of Industry, Trade and Cooperatives of the Republic of Kenya.

We believe that agriculture (including agro machinery), pharmaceutical and food industry could be first drivers of our cooperation. Establishment of the legal mechanism in the sphere of agriculture would greatly contribute to the process. There is also great potential in cooperation in the sphere of heavy industry, transport, building, energy, military-technical, aero and space industry, Information Technology (IT), Science and education among other areas.

Q: What are some of the successful initiatives being carried out by the embassy of Ukraine in Kenya?

The two levels of governments are in the process of entering into an agreement to waive duty for import to Kenya of yellow maize. This will see about 363 metric tons of yellow corn imported in to the Kenyan market up to the end of August 2017. We are working on agreement to have it on an annual basis.

We are also in the process of setting up Ukrainian companies in Kenya. The first one established is YuriaFarm, hopefully soon it will also include Indar and Saturn. Besides, we initiated the UNEA Resolution regarding protection of environment in areas of armed conflict which was adopted by consensus.

Q; What’s the total volume of trade between Ukraine and Kenya?

As at 2016, the total volume of trade between the two countries stood at US$ 38 420, 800.  Ukraine is a major arm supplier to the Kenya Defence Forces. For instance, in 2008, Kenya bought 33-Soviet-era T-72 tanks from Ukraine which were integrated into the Kenya army. Being the second grain exporter globally, Ukraine exported to Kenya grain worth US$ 115 million in 2013.

Q; What are some of the available investments opportunities in Ukraine?

The most perspective investment spheres in Ukraine are agriculture, IT, aerospace, pharmaceuticals and alternative sources of energy. You can also invest in hotel and resort industry, building of residential houses and shopping malls.

Q; In your own opinion, how best can Africa reap maximum benefits from its relations with both the East and the West?

Taking into account different heritage of African countries from the cold war era, it would be important for the continent to overcome existing difficulties and to unite and integrate itself – politically and economically to be stronger on the international arena. It is not necessary to choose East or West. The wise decision would be to choose values. Values of democracy and free market, human rights and human development and many other.

Q; As most African governments move to reduce donor funding in their budgets, where do you feel this places the donors in their co-operation with these governments?

I believe that if the former donors will become investors, it will be beneficial for all parties.

Q; What are your future plans in your diplomatic relations with Kenya and what kind of projects are you looking at initiating?

I’m looking forward towards a continuation of inter-parliamentary cooperation between the two countries geared towards establishment of friends groups in Parliaments. Enjoying Kenya’s political support to Ukraine and its territorial integrity we would like to strengthen bilateral dialog and political agenda. We need to have progress and finalization of consideration of 10 existing bilateral draft agreements.  We are also planning to revive previous volumes of trade turnover between Ukraine and the Republic of Kenya as it was in 2013. On a multilateral level we want to encourage decisions by the UN-Programmes, whose headquarters are situated in Nairobi – UNEP and UN-Habitat – to send to Ukraine evaluation missions with the final goal to proceed with post-conflict recovery of Donbass.

Renting car in Kenya is now a button-click away