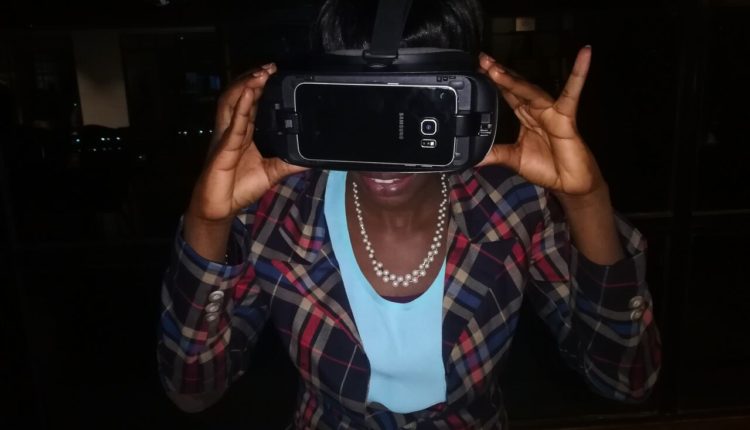 It might sound like a startling statement but, the growing interest in Virtual Reality (VR) could be the biggest revolution in the film industry. In May, the European Film Festival in Kenya hosted a Virtual Reality (VR) afternoon where the organizers of the festival, screened a cluster of films in VR as part of transmedia storytelling. The event hosted by The Bus, a Nairobi based working space for artists was packed with young movie enthusiasts wanting to try out this technology that is slowly taking over movie and gaming industry. At the festival a number of Kenyan films were showcased in VR leaving the young attendees yearning for more.

VR is a computer-generated scenario that simulates experience through senses and perception. VR requires several devices such as a headset, a computer, smartphone or another machine to create a digital environment, and a motion tracking device in some cases. It is two-way interactive: as one responds to what they see, that which they see in turn responds to them. If one turns their head around for instance, what they see or hear in VR changes to match their new perspective.

“VR was previously limited to gaming but is now finding its way into all spheres of life both private and commercial. We have seen it move into broadcast and content delivery such as in advertising and narrative film making,” says Brian Afande co-founder of BlackRhino VR one of the company offering the technology in Kenya.

According to Afande, VR in Kenya is becoming popular by the day. Among the reasons for this popularity is the fact that a variety of content globally is being produced with VR in mind. Technology, he says has caught up with African story telling in the continent. “The idea of filming in VR gives viewers an opportunity to immerse themselves into a film or documentary and feel totally immersed bringing out new possibilities to the film industry,” says Afande,

According to Nyambura Waruinge the European Film Festival curator, the decision to screen some of the films in VR was as a result of the increasing popularity of the technology. “A number of film festivals across the globe have been able to screen films using the technology. We felt we would also try it out here in Kenya.”

This year, VR once again featured in the Cannes Film Festivals in France to showcase some of short films and presentations at a section exclusively dedicated to VR.

Ng’endo Muuki, a Kenyan artist and animator whose film Nairobi Berries premiered at the festival’s VR afternoon, says VR has given content creators an opportunity to push the boundaries of subjectivity. This means they are able to tell stories in a different way that could be easily and better understood. Nairobi Berries is Kenya’s first 360 Virtual Reality film incorporating animation and live-action. The film according to Muuki is a poetic symphony of the city of Nairobi.

Afande, whose company was among those that collaborated with the European Films Festival, says most of his business has come from the corporate sector, as the demand for innovative and memorable branded content is driving the use of AR and VR in advertising. “We have a number of projects that we have undertaken with some of the big telcos here in Kenya. Most of the projects have been in developing promotional materials.”

Globally, motor vehicle company Mercedes has used the VR to show off its SL model. The company allowed consumers to have a virtual drive in California. Users were able to look around the car’s interior, peer up the sunroof and watch the car navigate the road.

Muuki says, while other forms of art such as music and movies have been grossly affected by piracy, VR as a technology gives the content creators a chance to market movies directly to those who already own VR equipment.

Jim Chuchu, the director and the writer of VR web series ‘Tuko Macho’ which also screened at the European Film Festival in Kenya says VR gives African film makers opportunities to complement and push story telling while  dissipating prevalent stereotypes about the continent. 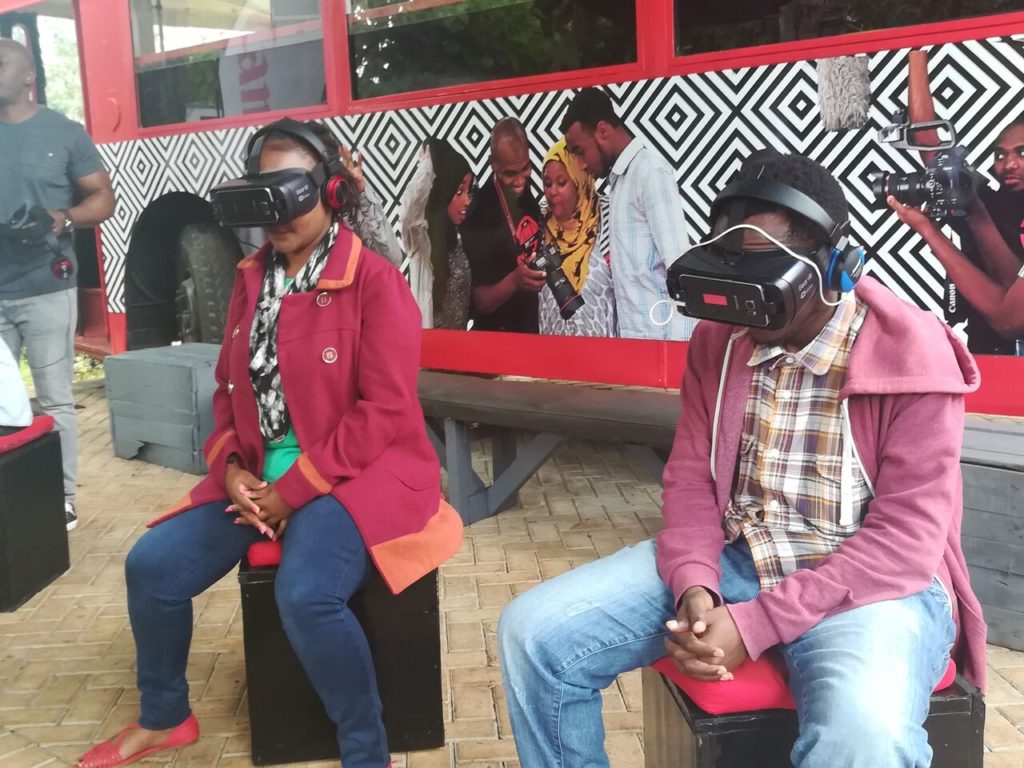 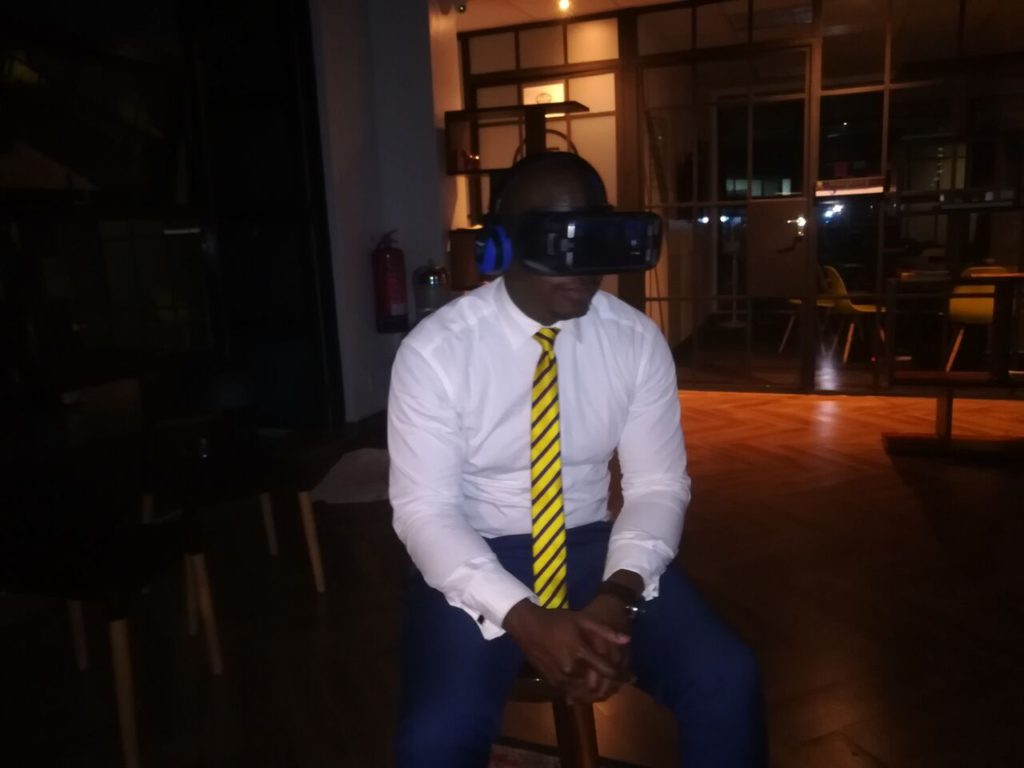 The challenges with VR according to Afande, is the fact that equipment is very expensive to most enthusiasts. “VR headsets are expensive and a few people own them hence as a demo is sustainable in the short term.” Supporting Afande’s claims, Muuki says most content creators are forced to grapple with access to equipment and being a new technology there are challenges in navigating and setting up using the new technology. “These are some of the impediments that could perhaps hinder the growth of VR in the continent.”

VR headsets come into two categories mobile and tethered. The mobile ones, common in Kenya, uses shells with lenses into which one places their smartphones. The lenses separate the screen into two images for the eyes turning the smartphone into a VR device. These are relatively inexpensive costing around US$100. Tethered headsets on the other hand are physically connected to PCs. The use of dedicated display in the headset instead of the use of smartphones as well as built-in motion sensors and an external camera tracker, improves the image fidelity and head tracking. The least cost of the tethered VR costs around US$400.

Though the technology is still nascent in some parts of Africa, South Africa currently leads in the efforts to use VR with several companies and equipment stores serving the industry.  “These markets have put heavy investment into the technology and that is why they have been able to make strides. Kenya we are on our way there,” says Afande.

Protecting you from Outages