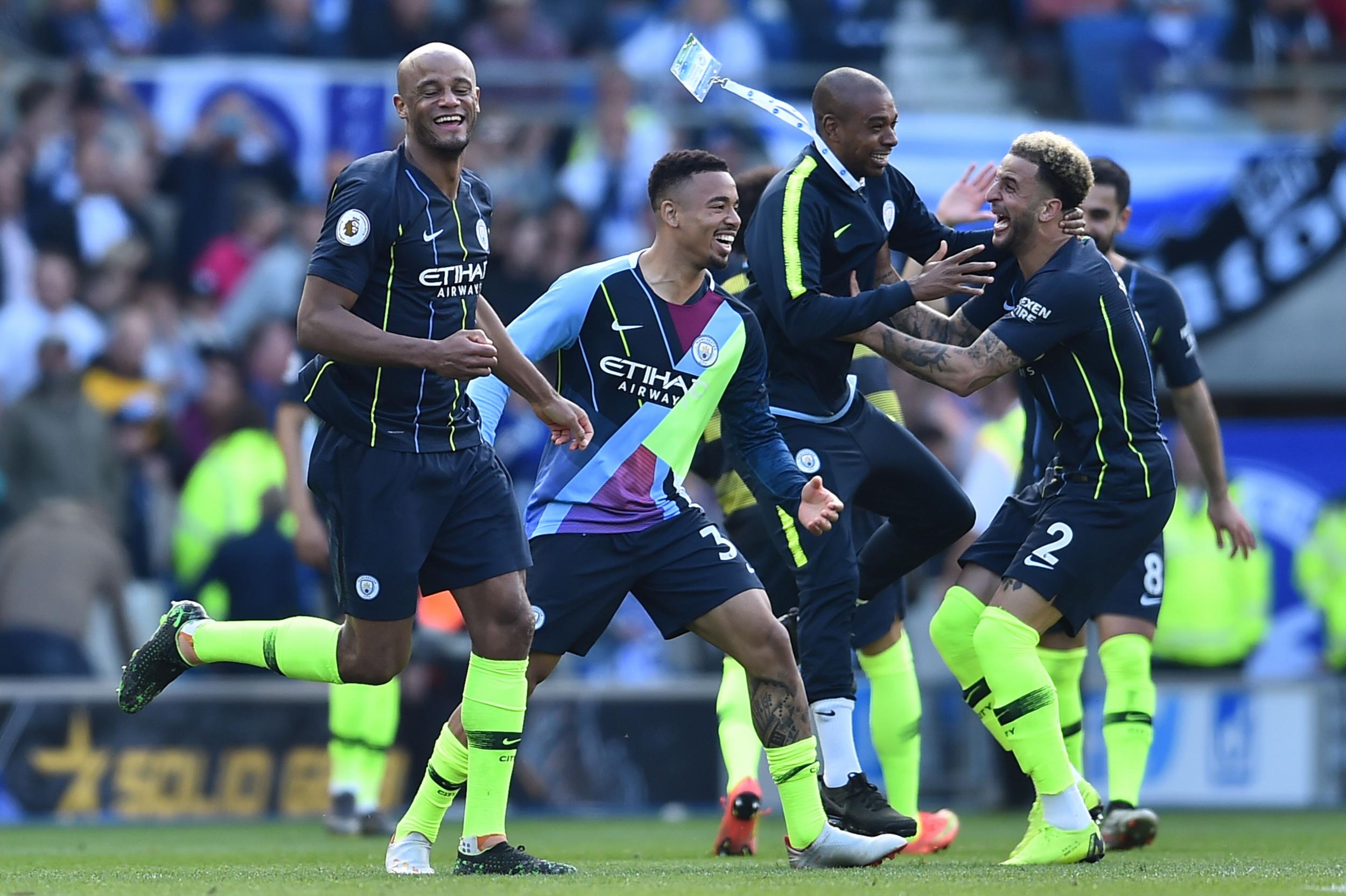 Manchester City are the Premier League champions. But that statement does not go anywhere near conveying this epic title race although it did feel so right that the goal that sealed it, the third one, the one that cleared the City bench in celebration, with Pep Guardiola punching the air, was a beauty.

But then City’s contest with Liverpool has been a thing of beauty all season and even on this final day there was a final twist. For 21 minutes Liverpool were champions, as they scored and Brighton took the lead here, but the new world order restored itself with goals by Sergio Aguero, Aymeric Laporte and that wonderful strike by Riyad Mahrez before Ilkay Gundogan’s almost equally as stunning free-kick.

It meant City claimed a fourth title in eight seasons and, in so doing, became the first team to retain it since Manchester United in 2009 which means a lot to manager Pep Guardiola.

They also became the first team to end a top-flight season with 14 consecutive victories, breaking Arsenal’s record from 2002.

It has been that stunning and it has taken such a stunning effort to beat Liverpool by just a point. Between them the two fine sides have 195 points, the first time two teams have passed 90 points in a season, with City finishing on top with 98. Incredible.

And so the lead at the top of the table changed again, during the game, with Brighton taking the lead. The Amex erupted. It came from a corner, conceded by goalkeeper Ederson, with Glenn Murray stealing in at the near post to head home. City were caught out. Murray had gone untracked, left by Oleksandr Zinchenko who surely should not have been marking him, and it summed up the flatness of the opening period from the champions-elect; they did appear nervous and lacking sharpness.

But they soon found it. That goal was the wake-up call, the slap across the face; the moment when reality but and they were in danger of blowing this. Just 83 seconds later they equalised with a trademark, well-constructed move which ended with the ball being fired into David Silva by Laporte for the midfielder to play a superb, first-time flick to thread it through to Aguero who shot quickly, shot low and shot through the legs of goalkeeper Mat Ryan to draw City level.

They pressed, forcing a corner after Mahrez’s shot was turned away. Raheem Sterling took it with Laporte charging in from the edge of the penalty area to power a header past Ryan from six yards. Given Brighton’s strength in the air it was a surprising goal for them to concede with Murray guilty of simply not following his run.

Right on half-time and there was a warning to City. It appeared Anthony Knockaert would take a free-kick, conceded by Vincent Kompany, but instead Lewis Dunk almost caught out Ederson with a 25-yard shot that the goalkeeper just about pushed out as it dipped.

That warning was heeded with a brilliant goal by Mahrez, a surprise starter perhaps and a fitful performer in this game and throughout this season who collected possession, turned Dunk, dumping him on the turf before striking a fierce right-foot shot from the area’s edge. Ryan got a hand to it but it was not enough.

He was beaten again. City were rampant and won a free-kick, centrally, 25 plus yards out. Gundogan stepped up and bent a right-foot shot high around the wall with the ball beating Ryan as he dived to his left.

The celebrations were in full swing with both teams running through their substitutions, with both captains – Bruno who, at 38, is leaving Brighton – and Kompany going off to standing ovations. He soon returned though to left the Premier League trophy.

How KENAS is watching your back

Shaping the future of petroleum