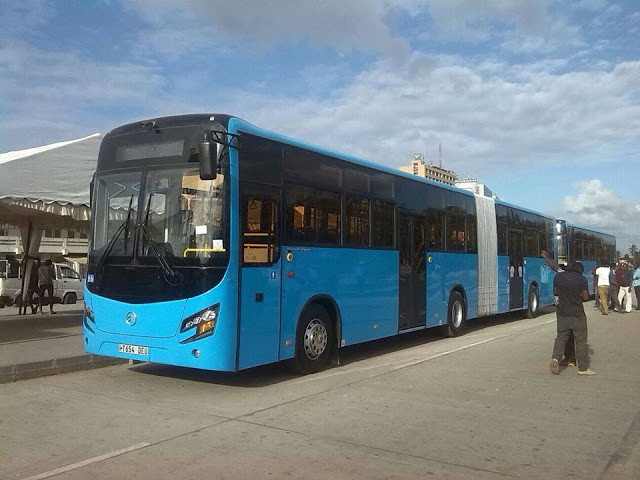 Since the 1980s, transport in Dar es Salaam Tanzania, a city with a population of five million, was a nightmare especially during rush hours. Commuters travelled in overcrowded and battered mini buses popularly known as dala dalas and traffic snarl ups were a normal occurrence. The rides were often bumpy and dirty with dust flying into the windows of the ramshackle minibuses.

But things have changed since the government launched the first phase of Bus Rapid Transit system five months ago. The launched saw the introduction of new state of the art buses that are pushing dala dalas out of business. For the last five months, the state of the art buses popularity in the capital has been evident by the masses of passengers crowding the terminals during rush hours to purchase their tickets.

At the bus termini located along the 12 Km route the buses operate, it is a common to see employees from Dar es Salaam Rapid Transit Company (DART) (DART) stand around ticket gates scanning cards or tickets to give commuters access to the terminal. 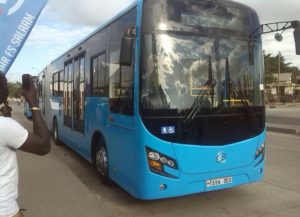 It takes about four minutes to purchase and scan tickets through scanners at the terminal before accessing waiting area. Compare this to dala dalas that zig zag helter-skelter into usually un-designated areas.

It takes utmost 10 minutes for the next bus to arrive and are normally full as passengers scramble to board them. Running on dedicated lanes the buses are a far cry from the run-down dala dalas and offer commuters cleaner and swift movement as opposed to the dala dalas.

A ride from Ubungo bus terminal to the Dar es Salaams Kariakoo area costs commuters US 0.30 which is a little bit expensive compared to the dala dalas that charge commuters US 0.18 for the same ride.

Bellinda Shillah a resident in Dar es Salaam who commutes on a daily basis from Kimara to Kivukoni some 18.2 kilometers, says that one of the key advantage points for the new buses is the transport time. The new buses operate on dedicated lanes in the middle of the road, separating them from all other traffic.

She says a trip from Kimara to Kivukoni area takes her about forty minutes using the new buses. While the same trip using dala dala ride would take an hour or longer depending on the traffic and the number of stop overs the minibuses make to pick up passengers along the way. “You are not even sure you will get to your destination because some of the old minibuses would break down often.”

DART buses are formal compared to the dala dalas and their drivers are neatly dressed and are more disciplined. They wear short sleeved shirts and trousers and are polite to their passengers as well. “This is different from the dala dalas where the commuters rush for any space they can find while conductors shout and dangle dangerously from open doors. The drivers also drive haphazardly,” adds Ms Shillah.

The DART buses allows room for standing passengers and run from 5am till midnight.

For both commuters and employees it has been a time of adaption to a whole new world. “Initially, the challenge for commuters was to understand how the system worked especially with the cards and ticket purchases. However, the situation has improved,” says Masawe Stephan an employee with DART service at the Msimbazi terminal in Dar es Salaam.

The other major challenge has been accidents involving pedestrians, motorcycles and cars colliding with the BRT buses. “Many people still pass through the special lanes by foot and by motorcycles and are sometimes knocked by the buses. However, the number of cases reported has reduced over time.” In the first week of operation about 14 accidents were reported.

On the other hand, operators of the dala dalas still insist they are relevant and will continue to play an important role in the transport business despite the new developments. “The new buses are slightly expensive as compared to our services. Most crucial is the fact that those buses do not go everywhere,” says Agostino Mrisho a tout with a dala dala plying the Posta-Makumbusho route.

About 70 per cent of Dar es Salaam comprises of unplanned settlement hence the absence of a public transport system. This has made the dala dala business thrive in some parts of the city.  According to a study by the African Development Bank there are 7,000 registered dala dalas in Dar es Salaam.

Bus Rapid Transit has implied a huge investment in transport infrastructure, including the widening of the city’s main roads. Currently, the system operates over 140 buses and 27 new stations which the government says are sufficient to meet the demand.