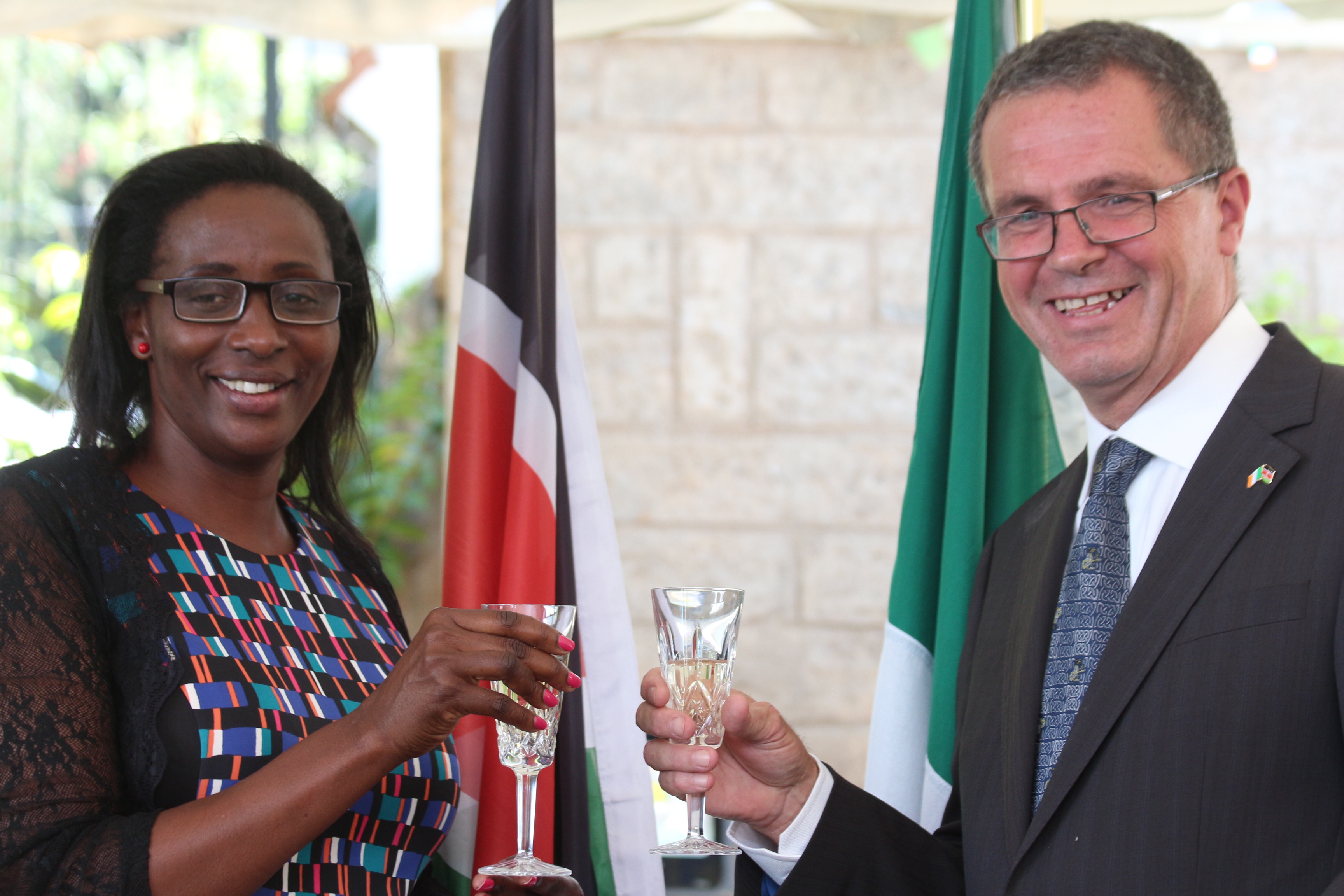 St Patrick’s Day is Ireland’s National Day. It is a time of celebration for the Irish and for all those of Irish descent and affinity around the world. It is also a time for sharing with the friends of Ireland. It’s a time forthe Irish people to connect, commemorate and celebrate their identity.

East African Business Times Magazine’s Boniface Otieno Kanyamwaya caught up with Dr.Vincent O’Neill, the Irish Ambassador to Kenya, on the sidelines of celebrations to mark the day at the Ambassador’s residence in Nairobi last month.He engaged him on a number of issues ranging from what the day means for the people of Ireland around the world, why Ireland reopened its embassy in Nairobi and bilateral cooperation between the two countries among other issues. Excerpts:

2016 marks a special year for Irish people around the world. It marks a celebration of 100 years since the 1916 Rising–the centenary of one of the most significant events in our nation’s journey to independence.A centre piece of Easter Rising in 1916 was the proclamation of Ireland as a free Republic, and one that promised equal rights and opportunities for all its citizens.

The Irish Government has marked this year as a year of reflection of our past and also as a time to consider how the idealism of those who fought for our freedom 100 years ago, can be relevant to the Irish in 2016 and to what Ireland might yet become.

Q:How do you feel to be the first Ireland ambassador to Kenya?

I am proud to be Ireland’s Ambassador to Kenya. I am proud of the strong historical relationship between our countries and the balanced relationships in political engagement, in economic development and in development cooperation.

Irish people have lived worked in Kenya for over 100 years. They have greatly contributed to its development as well as benefiting and learning from close cooperation with Kenyan citizens over this time.

This year, to mark 100 years of the Easter Rising and 100 years of an Irish presence in Kenya, the Embassy is leading a project to capture the contribution of Irish people to the development of Kenya over this time. This will include the contribution of missionaries (who established many leading schools in Kenya); of NGO’s, of Irish businesses and individual Irish citizens in areas such as engineering, legal services and healthcare.

Q: Why did Ireland reopen its Embassy in Nairobi?

Ireland closed the Embassy in 1998 for purely economic reasons — it was a period of recession in our country. Our relations with Africa has since changed beyond a focus on development cooperation – to a more balanced relationship encompassing political, economic, development and consular objectives.

The re-opening of the Embassy in October 2014, one of eight new missions opened globally at that time, coincides with strong government efforts to re-engage countries with which we enjoy a strong political relationship. It signals a determination not just to promote Ireland’s interests and values overseas but also establish mutually beneficial relationships which serve the needs and values of our citizens.

Q: How long do the Ireland and Kenya diplomatic relations date back?

Ireland first established an Embassy in Kenya in 1977. At that time there were over 2000 Irish citizen’s resident in the country. Kenya opened an Embassy in Dublin in 2007.

Irish political relationships with Kenya have always been strong. A good recent example of our political cooperation is the fact that in 2014 both Ireland and Kenya were asked by the United Nations Secretary General to co-facilitate the development of a new set of Sustainable Development Goals for the international community. This joint leadership and cooperationled to the agreement of the SDG’s by the all member states at the UN General Assembly last September.

Q: What’s so unique about Ireland, unlike other nations in Europe?

Ireland is a small island nation of almost 4.5 million in the north-west of Europe. A key defining characteristic of Ireland, a collective function of our history, our geography, our values and our economic necessity, is our outward focus. We have a long history of emigration – the Irish diaspora now amounts to over 70 million globally. Our outward focus is also reflected in the way we have structured our economy. Ireland is one of the most open economies in the world. We are the most successful country in Europe in attracting foreign direct investment. We are a proud and committed member state of the European Union. After a few difficult years, our economy last year grew at over 7.5 per cent and, thankfully, many of the dark days of the recent recession are behind us.

Q: What characterises Ireland in 2016?

Ireland today has the youngest population in the European Union. We are the most globalised country on the planet. Our economy is a modern knowledge economy focusing on services and high-tech industries. We are the most successful country in Europe in attracting Foreign Direct Investment.

We are very dependent on international trade and much of our manufacturing and service industry is export focused. We greatly benefit from our membership of the European Union. We export food to 175 countries worldwide – and export almost 10 times more beef that we consume ourselves.

Q: What’s the total volume of trade between Ireland and Kenya?

Trade between Ireland and Kenya is growing significantly. In 2015, for example, bilateral trade went over the € 100 million mark for the first time –indicating a 120% increase from the previous year. 40% of this trade was accounted for by exports from Kenya to Ireland. Flowers, fruit, vegetables, tea and coffee accounted for 90 per cent these exports. Ireland imports tea, coffee, flowers and machineryfrom Kenya.

The Embassy is actively involved in activities to deepen Ireland’s trading relationship with Kenya – this includes the establishment of a Business Ireland Kenya network; the planning of a trade mission from Ireland to Kenya in 2016; the development of linkages between Kenyan and Irish business organisations and networks and the commissioning of studies to identify investment opportunities in Kenya for Irish based companies.

Q:What are some of the other successful initiatives that are being carried out by the Irish Embassy in Kenya?

For the first time in 2016, we have introduced the Global Greening Initiative in Kenya. The purpose of this campaign is to bring attention to Ireland’s relationship with our diaspora communities and with our friends in countries across the world where there is an official Irish presence.

In mid-March, Ahmed, the iconic Kenyan Elephant who occupies a very important place in Kenyan history, and whose sculpture is located at the National Museum, was formally ‘Greened’at a ceremony led by the CS Environment. By Greening Ahmed we openly celebrated Ireland’s relationship with Kenya. We also wanted to draw attention to a hugely important social and environmental fact — that in Africa, more elephants are being killed for their ivory than are being born each year. An estimated 20,000 elephants were killed in 2015 alone.