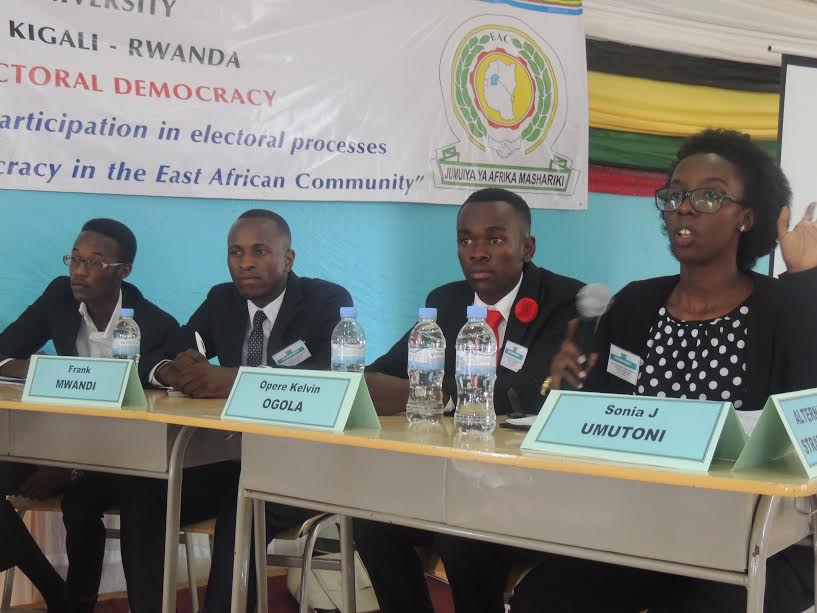 The EAC University Students’ Debate Model is an interactive and representational style of debating aimed at educating, discussing and making resolutions among the Youth in East African to nurture a bond of “Eastafricaness” with a distinct East African identity.

The objective of the EAC University students’ Debate Model is to exchange information, share ideas and develop a common ground among the students and youth in the bloc.

The Motion for this year’s debate is “This House believes that effective Youth participation in Electoral Processes is a prerequisite for attaining sustainable Electoral Democracy in the East African Community.”

Officiating at the official opening of the Debate, Rwanda’s Minister of Trade, Industry and EAC Affairs, Hon. Francois Kanimba, challenged the students and youth in general to seize the opportunities being presented by the EAC integration process to advance their careers and sources of livelihood.

The Minister said the youth represent a larger demographic portion and constitute more than 63% of the EAC population hence they have a huge role to play in shaping the EAC they want.

“The energy, ideas and enthusiasm that you will demonstrate here are part of the solution to achieving a realistic EAC and Africa that we want. Our region needs a new generation of problem-solvers, who take positive actions and see farther, and work smarter to achieve the EAC vision,” said Hon. Kanimba.

Hon. Kanimba disclosed that under the Northern Corridor Integration project, Partner States had agreed to harmonize tuition and non-tuition fees with the aim of facilitating the free movement of people including students in within the Community.

“Therefore, utilize these facilities well so that the dream of a prosperous East African Community can become a reality.”

Welcoming the Debaters, students and guests to the Kigali Independent University, the University’s Vice Chancellor; Dr. Sekibibi Ezechiel, commended the EAC Secretariat for choosing the institution to host the debate and urged the youth and students to passionately get involved in the regional integration process.

At the same function, the EAC Deputy Secretary General in charge of Political Federation, Mr. Charles Njoroge, said the theme of this year’s debate was timely and that the vitality of Youth participation in electoral democracy cannot be left to the whims of anyone but was a fundamental constitutional right that is encapsulated in most EAC Partner States’ Constitutions and the EAC Treaty.

“Participation is thus a component of democracy for young leaders in East Africa, which enables them to passionately cherish and jealously guard the principles of democratic governance in facilitating development of our region,” said Mr. Njoroge.

The DSG advised the youth to refrain from violence, corruption, and to always abhor divisive politics, which could endanger the unity and oneness of the people both within and among the Partner States, to ensure that the regional motto of “One People, One Destiny” is sustained.

He reiterated the need for Youth leaders to understand their societal values required to provide effective leadership in the EAC, which include upholding unity in diversity, being accountable and ensuring transparency, and Team work, as key to success.

“The East African Community is your region and your future. You need to collectively guard it well with an ultimate goal of attaining a Political Federation,” the Deputy Secretary General affirmed.

Mr. Njoroge informed the audience that since the inception of the Youth Debate in 2012, the Secretariat has been able to register tremendous achievements in EAC youth activities, which include the appointment of EAC Youth Ambassadors and their Deputies each year in every Partner State, adding that the Youth Ambassadors have competently taken up the mantle of continuing the dialogue; and reaching out to fellow young people throughout the region on the EAC integration.

Kenya improves in the Ease of Doing Business ranking