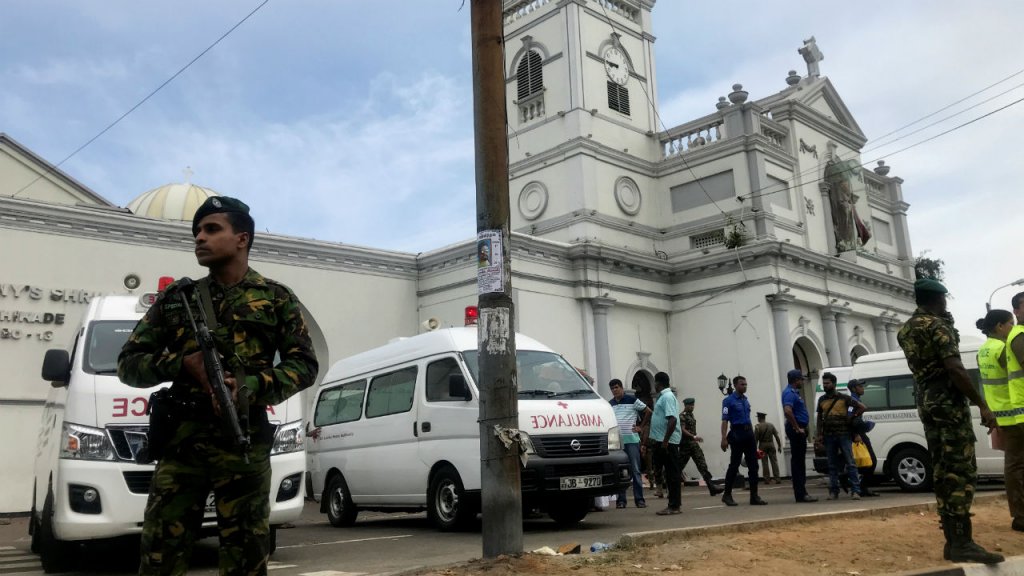 Death toll in Sri Lanka has soared to 290 after a series of bomb blasts hit churches and luxury hotels across the country on Easter Sunday. Police said that 24 people have been arrested, but it is not yet known who carried out the attacks. Around 500 people are injured, with dozens of foreign visitors among the dead and injured. Five British people, including a mother and her 11-year-old son, were killed as six simultaneous explosions hit.

A further two bombs exploded elsewhere in Sri Lanka as police responded to the first attacks. The country is today in shock as it comes to terms with the deadliest violence to hit since the end of the civil war in 2009. Police and security services in Sri Lanka are continuing to investigate what they believe were a series of suicide bomb attacks.

The US State Department has this morning revised its travel advice, saying terrorists are continuing to plot ‘possible attacks in Sri Lanka’ warning tourist locations may be a target. Foreign Secretary Jeremy Hunt said there was ‘lots of speculation at the moment but there is no hard knowledge’ about the perpetrators of the atrocity and ‘we obviously need to wait for the police in Sri Lanka to do their work’. He said the UK would offer Sri Lanka support in the days to come.

What we know so far

Police say one line of inquiry will be to look at what intelligence services knew about the attacks amid reports they failed to detect or warn of threats before the violence. Minister for Telecommunications Harin Fernando earlier tweeted: ‘Some intelligence officers were aware of this incidence. ‘Therefore there was a delay in action. What my father heard was also from an intelligence officer. Serious action need to be taken as to why this warning was ignored.’

In Colombo, church St Anthony’s Shrine and five star hotels the Cinnamon Grand, Shangri-La and Kingsbury were targeted in the first wave of explosions shortly before 9am local time as worshippers attended morning services and tourists enjoyed their breakfasts. Brits caught up in the carnage in Colombo described the ‘horrific scenes’ they witnessed.

Kieran Arasaratnam, a professor at Imperial College London Business School, was staying at the Shangri-La. He told the BBC: ‘Everyone just started to panic, it was total chaos. I looked to the room on the right and there’s blood everywhere. ‘Everyone was running and a lot of people just don’t know what was going on. People had blood on their shirt and there was someone carrying a girl to the ambulance.

The walls and the floor were covered in blood.’ Hampstead and Kilburn MP Tulip Siddiq said she had lost a relative in the attacks. Posting on Twitter, she said: ‘It’s all so devastating. Hope everyone is keeping safe. Solidarity with the people of Sri Lanka.’ At around the same time as the blasts in Colombo, explosions were also reported at St Sebastian’s Church in Negombo and at Zion Church in the eastern town of Batticaloa.

A few hours later, two more blasts occurred just outside Colombo, one of them at a guesthouse, where two people were killed, the other near an overpass. Three police officers were killed during a search at a suspected safe house on the outskirts of Colombo when its occupants apparently detonated explosives to prevent arrest. Prime Minister Theresa May said the Easter Sunday massacre was ‘truly appalling’, and ‘no-one should ever have to practice their faith in fear’.