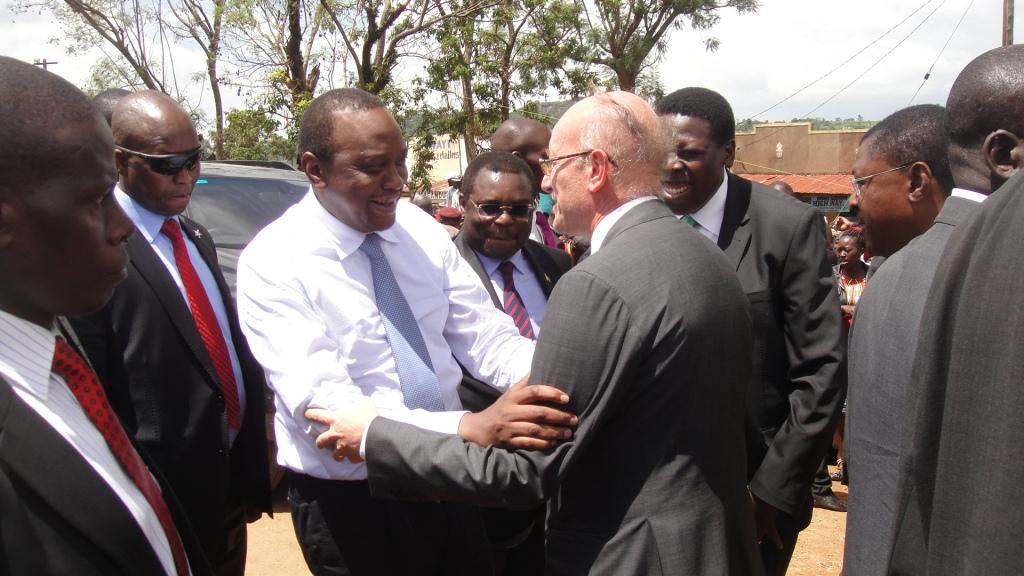 Kenya and Italy enjoys a cordial relation that dates way back to 1964. Italian assistance to Kenya is in the form of grants, concessional loans and technical assistance. For instance, in July this year Kenya signed a Ksh.34 billion financing agreement with Italy’s BNP Paribas and Intesa San Paolo Banks for the construction of Itare Dam in Kuresoi.

How long has Italy and Kenya been in this relationship?

Massoni: Diplomatic relations between Italy and Kenya are well consolidated. The historical relations between our two countries are much older and go back to the late 19th century. The first Italian Ambassador to Kenya presented his credential to former President Jomo Kenyatta in Nairobi on July, 1964. From the first courageous Catholic missionaries of the Consolata Institute, the coffee and tea farmers to the war prisoners and from the safari organizers of the ‘50s, to the space engineers of the ‘60s up to aid experts in more recent time.

Which sectors of the Kenyan economy are you focusing on?

Massoni: We focus on promoting Italian products in those sectors that we are well recognised in globally. These include fashion, food and beverage industry. For instance, the Italian fashion is well appreciated by the economic and political leadership of Kenya.  It’s easier to find Italian wines or food products in the large-retail stores or restaurants in the country. The fast-paced growth of the Kenyan middle class also represents strategic opportunities for the Italian entrepreneurial system. We also pay great attention to the infrastructure, energy, and tourism sectors and development of industrial districts such textile and leather, which may offer important possibilities of investments and collaboration for the Italian companies.

What are some of the initiatives that you have successfully carried out in Kenya?

Massoni: We have been fully engaged in the promotion of the last EXPO Milano 2015.  The event found positive response in Kenya, a large number of Kenyans visited Italy during the expo, which was graced by H.E. President Uhuru Kenyatta.

Another successful event, organised by the Kenyan government in partnership with Italian Embassy, was the first edition of the trade fair IPACK IMA held in Nairobi in 2014. The event was focused on packaging and food processing; sectors where technologies and know-how can played important role in growing the local industry. The event attracted 75 Italian companies, the biggest Italian company’s delegation in the last decades.

We have also, in the last two years, acknowledged an historical increase of political high level contacts: official visit to Nairobi by the Italian foreign minister; visits to Italy by the Kenyan Ministry of Treasury and the Kenyan National Assembly Speaker Hon. Justin Muturi; official mission to Kenya by the Italian Prime Minister Matteo Renzi, the first visit of an Italian Prime Minister in Kenya since Kenya’s Independence; followed by the State visit by H.E. President Kenyatta to Italy.

What is the total trade volume between Italy and Kenya today?

Massoni: We are registering a constant increase of the trade exchange between Italy and Kenya. The recent entry into the Kenyan market by some of the leading Italian companies such as CMC Group, ENI, ENEL Green Power, SACE and LEONARDO were as a result of successful bilateral cooperation conducted in the past year, which range from the strengthening of our partnership in economic and trade relations, to a closer coordination in international fora.

There has been this debate about Africa increasingly shifting its trade balance towards the East compared to the West. How is this likely to shape the trade relations between Africa and the two blocs?

Massoni: Confrontation between East and West blocs in the era of globalization becomes a topic of marginal value since the utilitarian thought at the basis of the free market requires effectiveness and best practices. What I hope is that Kenya, and Africa in general, could pursue a strong and mature policy of check and balances in order to be in the position to choose the best from East and from West and to strengthen political and economic models more and more inclusive. Choosing sides would be impractical for the development of a Country and a Continent.

Most African governments are now seeking to scale down on donor funding in their budgets. How is this likely to affect their co-operation with the donor countries?

Massoni: Due to the economic recession the Italian Government has in the past years reduced the amount for the implementation of his global cooperation activity. Within this process of rationalization, Kenya remains a priority country for the Italian cooperation. Together with the Kenyan authorities we are working on the definition of the following future soft loans: 45 million Euros for energy project; 15 million Euros for waste management project; and 6 million Euros for social and economic development projects in Malindi County. At the same time the Italian cooperation is financing 15 development projects implemented in Kenya by Italian NGO’s to a tune of 11 million Euro, and dozens of Italian NGO’s are operating in the country on health, water and sanitation, food security, slum upgrading and child protection.

What is your message to the European Union mission in Africa?

Massoni: Let me focus on Kenya. I think that Ambassador Stefano Dejack, Ambassador of the EU in Kenya, is performing very well since his arrival. Thanks to him EU and Kenya resumed political dialogue.  The EU is looking to Kenya with a renewed interest, both for a political and an economic point of view. Kenya is regarded more by EU as a strategic partner in East Africa. At the moment the main issue is related to the EPA (Economic Partnership Agreement) agreement. If the East African Countries will reach a solution EPA will be signed before the October deadline expires. If this does not happen I really wish that the EU and the Kenya Government will find a bilateral solution avoiding Kenya to suffer the devastating consequences that a failed finalization of the EPA would engender for the Kenyan economy. In case of failure the process of integration inside the East African Community would also be exposed to considerable risks.

What future plans do you have with Kenya and what kind of projects will you be working on moving forward?

Massoni: First, we look forward to finalising the renewal of “Malindi San Marco Space Agreement” with the Kenyan counterparts. Since 1964 the Space Centre Luigi Broglio operates in the coast of Kenya – before, through the launch of satellites and, today, detecting and analysing data; the presence of this centre, historically, represents an important component of our bilateral relations.  Other bilateral agreements that should be concluded positively by the coming months are: the Agreement on Double Taxation and the Agreement on Police Cooperation.

Despite political turbulence, Burundi has kept its private sector alive