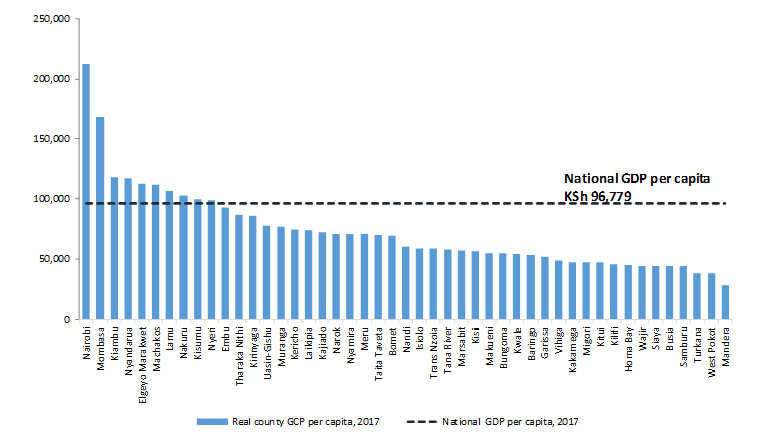 Kenya is one of the fastest growing economies in Africa, but its performance is often hit by natural disasters such as drought and disruptive political tensions during elections.

During the 2007 presidential election, for instance, violence and chaos scared away some investors, hurting the country’s economic growth. After the 2013 elections, which ushered in the new constitutional era, missed revenue targets, rising public debt and uncontrolled expenditure also emerged as concerns for investors.

However, in a recently released Kenya National Bureau of Statistics (KNBS) report, the economy picked up, rising by 1.6 percent to hit 6.3 percent in 2018, compared to 4.7 per cent registered in 2017.

The growth, according to the report, was largely contributed by growth in the agricultural, manufacturing and transport sectors, amid effects of an adverse weather and political instability in the election year.

Data from the report shows that the country’s financial sector grew at 5.6 percent in 2018 compared with 2.8 per cent in 2017, immensely contributed by increased agricultural production.

While the majority of crucial economic segments recorded exemplary growth, it is agriculture that held the most dividends creating a knock on effect in the excelling of subsequent economic sectors.

Considered the backbone of Kenya’s economy, agriculture and related activities such as fisheries and forestry, accounted for more than 34 per cent of GDP, resulting to a sharp growth of 6.4 percent in 2018 from a revised 1.9 percent in 2017.

“We have noted the issue of sufficient rains and the multiplier effect that agriculture has on growth in other sectors,” said Mwangi during the unveiling of the report.

Maize production, the director adds, increased by 26 per cent to 44.6 million bags while tea and coffee production recorded growths of 12.1 per cent and 7 percent respectively during the period of review. The report linked the growth in agro-processing to the increased production of dairy products, tea, coffee and sugar under the favorable weather conditions.

Improved growth was recorded in sugar manufacturing, liquid milk processing, black tea and manufacture of beer and soft drinks. Improved rainfall across 2018 further stimulated the improved delivery of electricity supply, as a share of total energy generated reached 86 percent from an initial 73.3 percent at the end of 2017, according to the KNBS report.

Agricultural production, which hosts the highest share of employment in Kenya, registered a 10.1 percent growth. Manufacturing, the second largest creator of most informal jobs, also recovered from a five-year low of 0.5 per cent in 2017 to grow by 4.2 per cent in 2018, the highest increase since 7.2 percent recorded in 2011.

Citing the close correlation between conducive weather patterns, the performance of the agriculture sector and the consequential achievement of subsequent economic segments, National Treasury Cabinet Secretary Henry Rotich emphasized on the need to support interventions on the currently rain-dependent sector.

“To continue supporting the agricultural sector, the government will continue to invest in irrigation to reduce the dependence on rain-fed agriculture and increase the amount of land under crop production, in addition to targeted reforms and agendas to boost food security,” the CS said.

The KNBS economic survey warned of risks to economic growth in 2019, attributing their concerns to the delay of long rainfall season.

For employment, millions of Kenyans still remain jobless since President Uhuru Kenyatta assumed power in 2013, this despite the ‘booming’ and ‘robust’ economy statistics. According to KNBS, only1.8 million jobs have been created in six years.

“In 2016 alone, 1.44 million unemployed Kenyans formed part of the 19.31 million working-age population, while 5.64 million of the same population was inactive due to school and family responsibility,” The KNBS Survey notes.

During a recent interview in a local broadcast, Safaricom CEO Bob Collymore questioned sections of the ‘promising report’, saying the alluded to economic growth should reflect the reality on ground.

More than 500,000 graduates are released into the market from universities annually, with the hope of getting formal employment. Yet job opportunities keep declining. According to the survey, the number of new jobs created last year declined by 69,400 from 909,800 reported in 2017, resulting to only 840, 600 jobs being created.

In the private sector, agriculture contributed to the bulk of Kenya’s employment, at 294,300 workers, followed by wholesale and retail with 258,900 employees and Education with 223,900 workers.

In the public sector, Education had the largest workforce of 352,900 employees followed by Public Administration and Defense jobs at 295,000 workers.

“The Teachers Service Commission, which is the largest employer in the public sector, registered a 3.5 per cent growth in employment in 2018,” the report indicated.

Despite the growth plunge in public sector hiring, the public wage bill grew by 10.3 per cent last year to Sh2.02 trillion, a larger figure compared to the private firms which paid their employees a total of Sh1.41 trillion.

In early April, the Central Bank of Kenya in collaboration with the Kenya National Bureau of Statistics and Financial Sector Deepening (FSD) launched the Financial Access (FinAccess) Household Survey 2019.

The 2019 Survey sought to improve on track records facilitating the financial growth by providing information beyond the conventional measures of access and usage. The survey provides new information on the quality and impact dimensions, examining financial health and livelihoods, consumer protection, financial literacy in addition to probing more deeply on the frequency of usage.

The survey also includes independent business and agriculture modules to better understand usage of financial products and services within these livelihoods, crucial for the development of an all-inclusive financial ecosystem for all Kenyans.

Measurement of financial inclusion in Kenya commenced in 2006 through the creation of FinAccess surveys implemented over the years by the Central Bank of Kenya (CBK), Kenya National Bureau of Statistics (KNBS) and Financial Sector Deepening (FSD) Kenya.

The disparities in financial access between rich and poor, men and women, and rural and urban areas have also declined. This has been instigated by the growth of mobile money, government initiatives and support, and developments in information and communications technology (ICT).

The significant reduction in the proportion of the adult population totally excluded from financial services and products liberates the policies, strategies and reforms undertaken by the government as well as the widespread adoption of digital technology and innovations by financial sector players.

These have helped in deepening financial inclusion by enabling the population to overcome infrastructural curtailment to access especially in rural areas.

S. Sudan partners with the AEC to assist its Petroleum Sector

The Scope of Oil and Gas sector in East Africa