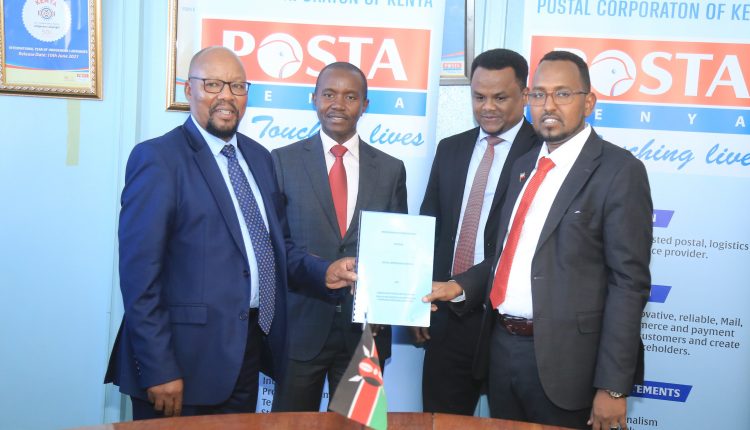 The Postal Corporation of Kenya (PCK) has signed a Memorandum of Understanding (MoU) with the Somaliland Postal Services exploring cooperation in the areas of mutual interest in various services.

The services include international mail processing and delivery, knowledge exchange, and innovative solutions in Kenya, Somaliland, and other African countries.

There will be an establishment of a joint venture, knowledge and training exchange, and transfer. The unions have also agreed to jointly set up mail and parcel sorting centres at any suitable place for the mutual benefit of the parties.

This comes amid the Union’s pledge to respect international security standards and procedures and the use of electronic data interchange (EDI) systems in facilitating the overall security of the international mail and parcel transport network.

Signing of the agreement at the PCK headquarters in Nairobi was witnessed by Joe Mucheru, EGH, MBS, Kenya’s Cabinet Secretary for Information and Communications, Innovation and Youth Affairs, on one hand, joined by Sharmake Gele, Somaliland Deputy Ambassador to Kenya.

Joe Mucheru further stated that Kenya fully supports the integration of countries in the East Africa region, now with a population bigger than Europe. Adding that the MoU would go a long way in cementing postal services integration in the region.

Mr Gele said with the signing of the deal, Kenya has offered Somaliland an opportunity and empowerment for a robust gateway for international connectivity.

Somaliland is an autonomous region in northern Somalia, which broke away and declared independence from Somalia in 1991.

Further saying that the signing of this cooperation offers Somaliland a great gateway not only to East African countries but to the rest of the world.