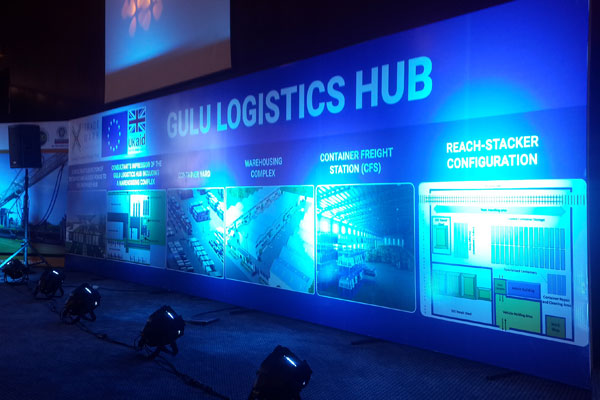 Uganda’s government is set to construct the first logistics hub at Gulu Railway station, which is in the Northern part of the country. The hub will target markets in South Sudan through Alegu and the Democratic Republic of Congo (DRC) through West Nile.

Benon Kajuna, the director of transport in the Ministry of Works and Transport says the hub will be constructed on about 24 acres of land provided by the government, at a cost of $8.6 million, of which $5.6 million will be by DFID and TradeMark East Africa.

“In October 2016, we completed a pre-feasibility study for the project, with designs expected at the end of this year. Currently, a consultant is working on the proposed design for the project. We expect construction to commence by end of 2018,” Mr Kajuna said during a delegates conference at the Joint Oil and Gas and Logistics Expo 2017 at a Kampala hotel.

Gulu is one of the four areas that had been allocated a logistics hub, and upon completion, the hub is expected to serve two export markets for Ugandan goods as well as for those destined for DRC and South Sudan.

Its construction is based on a private-public partnership (PPP).

He said Uganda could expand its target markets to reach the Central African Republic if the hub is commercially viable.

“There is an opportunity for Uganda here if it targets the Eastern DRC market and South Sudan. For South Sudan, it will need almost total reconstruction so will need to import large volumes of food, construction material, and capital equipment,” Pearson said.

To create a platform for the efficient flow of business activity, governments have embraced logistic hubs, this in a bid facilitate and unlock domestic and overseas investments from the private sector through combined strategies that seek to improve competitiveness.

Countries like Jamaica have used strategies to position themselves as global logistics hubs with the concept of the Global Logistics Hub Initiative (GLHI), a move that enabled them raise their investment profiles and promote both domestic and foreign trade.