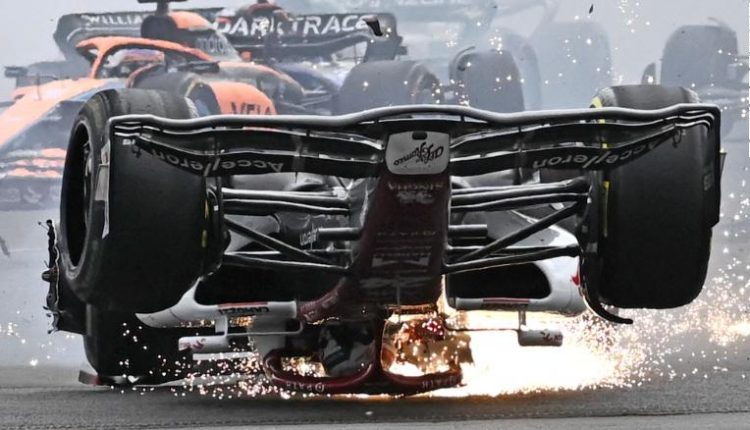 Formula One driver Zhou Guanyu has credited his car’s halo protection device for saving his life after he was involved in a horrific high-speed crash during the first lap of Sunday’s British Grand Prix.

Zhou was one of several drivers involved in the turn one crash, which resulted in his Alfa Romeo flipping over and skidding across the track and onto the gravel, before smashing into the fencing.
The halo, which is made from titanium, forms protection around the cockpit and was introduced in 2018. Although it was initially met with some criticism from drivers, several drivers have since credited the halo for preventing serious injuries.
“I’m ok, all clear,” Zhou tweeted later on Sunday, along with a selfie. “Halo saved me today. Thanks, everyone for your kind messages!” 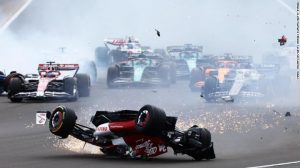 Zhou’s car ended up wedged between the tire barrier and catch fencing, which is there to protect fans. The awkward nature of the car’s placement meant it took some time to extract him.
Mercedes’ George Russell, who made contact with Zhou during the collision, immediately got out of his car once it had come to a stop and ran over to check on Zhou.
The rookie, who is the first Chinese driver in F1, was eventually pictured being stretchered away by emergency medical personnel and was later given the all-clear after being assessed at the medical centre.
Williams driver Alex Albon was also involved in the crash and was flown to a local hospital for checks. He was later given the all-clear, his team confirmed on Twitter.
The race was red flagged and suspended until Zhou’s car had been removed. As the cars were returning to the pits, members of an environmental group made their way onto the track and sat down in protest, though fortunately, the racing had stopped.
Once racing restarted, Ferrari’s Carlos Sainz secured victory for his first win in F1, with Red Bull’s Sergio Perez second and home favourite Lewis Hamilton in third.
Formula OneHigh-speed crashZhou Guanyu
0
Share FacebookTwitterGoogle+ReddItWhatsAppPinterestEmail