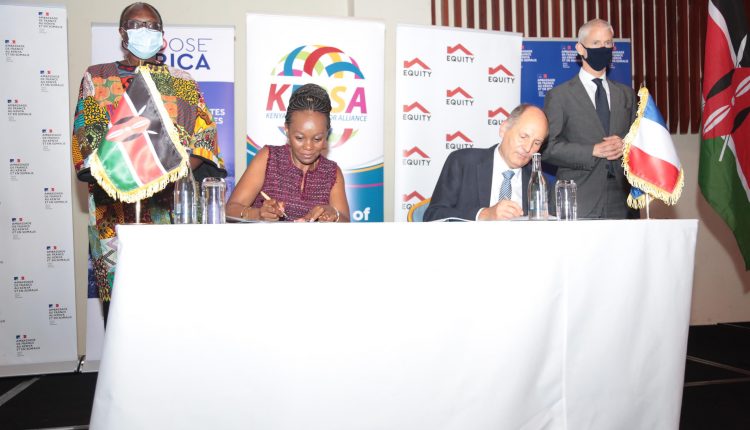 KEPSA and the Mouvement des Entreprises de France International (MEDEF), have renewed their Memorandum of Understanding (MOU) for a period of five years, in support of trade between Kenyan and French businesses.

The initial MOU, signed in 2012 has seen KEPSA and MEDEF collaborate in hosting high-level business forums both in Kenya and France to facilitate trade and investment opportunities for their respective members over the years.

In her speech following the signing of the MOU, KEPSA CEO Carole Kariuki noted that France is the fifth top source of Foreign Direct Investment inflows to Kenya, making it one of Kenya’s leading markets in Europe.

“In 2020 our businesses exported USD 87 million in products such as avocados, pineapples, cut flowers, beans, and vegetables. Likewise, we imported USD 219.1 million worth of products such as food preparations, petroleum products, pharmaceuticals, and machinery, among others. This is in addition to 46,000 French nationals who visited Kenya in 2019, a major boost for our tourism industry”, she said.

In March 2019 KEPSA and MEDEF co-hosted a successful networking dinner with 45 French business leaders in Nairobi alongside the state visit by the French President H.E. Emmanuel Macron. In October last year, KEPSA participated in a high-level luncheon hosted by MEDEF in Paris.

“With the renewal of our MOU with KEPSA, MEDEF is looking to increase investment in Kenya, which is now a regional economy, through building a stronger and sustainable value chain,” said Philippe Gautier, MEDEF CEO.

MEDEF Is the largest employer federation in France. Established in 1998, It has more than 750,000 member firms, 90 percent of them being small and medium enterprises (SMEs) with fewer than 50 employees. MEDEF is engaged in lobbying at local, regional, national, and across the European Union.

Areas of agreement in the renewed MOU include; First, the joint promotion, development, and strengthening of trade, investment, joint ventures, and business relationships between KEPSA and MEDEF members.

Second is the promotion of better knowledge, understanding, confidence, and structured trade between SMEs in both countries. Thirdly KEPSA and MEDEF will jointly provide business forums and platforms to introduce Kenyan and French businesses, to foster trust and confidence in potential partnerships, pitching opportunities, exhibitions and deal making.

KEPSA and MEDEF will also advocate for greater access to business opportunities and contracts for SMEs in France and Kenya in addition to better policies and regulations in the respective countries regarding ease of doing business and market access.

MEDEF is KEPSA’s longest serving international partner and is KEPSA’s counterpart in France. Jointly the business member organizations have held seven forums since the first MOU signing which has seen over 100 French businesses invest in Kenya including the resumption of Air France flights and establishment of the Peugeot Car Assembly plant.

Recent establishments include the Vinci the group, Voltalia in Energy, Carrefour in retail and Yves Rocher in cosmetics as well as Rubis Oil which will be the largest downstream oil companies in Kenya. Others are Bolloré Logistics and Schneider Electric which have greatly expanded in the country and the EAC region.

KEPSA has also been working closely with the French Embassy in programs such as the Creating Opportunities and Alleviating Poverty through Sustainable Trade (COAST) project that aims to support women and youth entrepreneurs in Mombasa County to establish businesses based on the circular economy model creating solutions in waste management.

Present at the event was Franck Riester, France Minister Delegate for Foreign Trade and Economic Attractiveness, Betty Maina, Cabinet Secretary for Industrialization, Trade and Enterprise Development as well as Aline Kuster-Menager, Ambassador of France to Kenya among other dignitaries.

“Our economy is especially driven by SME business, and we welcome this strong interest that is being cultivated by France in Anglophone East Africa. We hope that the MOUs signed here today will encourage more French companies to set up operations here in Kenya,” said CS Betty Maina.

“Many French companies have recently invested in production or distribution networks in Kenya. This highlights the focus of our economic relationship. Today we have over forty companies from France in this delegation and which demonstrates how important we feel Kenya is, a logistical and commercial hub, and a gateway into East Africa and one of the main markets for French companies in the region,” said Riester.

Other MOUs that were signed during the forum include Proparco and Equity Bank signing on Portfolio Guarantees project, Signing of the financing of Shamba Pride by Africaseeds, and an agreement between Saint-Gobain and Kens Metal Industries Limited.

The MOU with MEDEF comes just weeks after the launch of the Kenya-USA SME Trade and Entrepreneurship Initiative between KEPSA and Corporate Council on Africa (CCA) that will see the two business member organizations collaborate in developing specific programs for scaling up SMEs in Kenya and the United States of America.