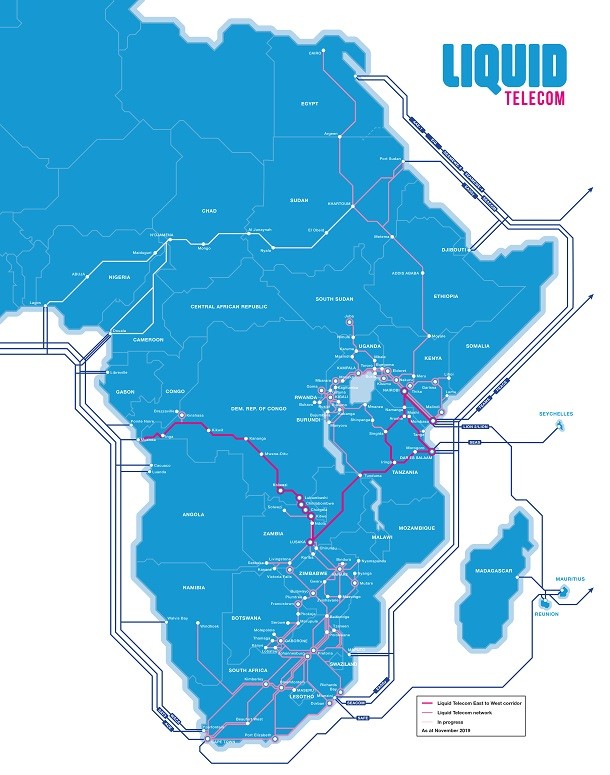 This expansion connects millions of DRC citizens and thousands of businesses to Liquid Telecom’s ‘One Africa’ broadband network linking the African continent to the rest of the world. This will help to create a foundation for social mobility, economic diversification and private sector-led growth both in the DRC and more widely across Africa.

It also underscores the company’s commitment to bring high-speed connectivity to every African on the continent.

Until recently, no direct, land-based fibre network existed between East and West Africa. Network traffic between Kinshasa in the DRC and Dar es Salaam in Tanzania, for example, was routed via London. Liquid Telecom’s East to West fibre link promises significantly reduced latency between major continents via Africa.

It also meets the growing demand from global enterprises for fast, reliable, high-capacity and cost-effective communication across the southern hemisphere.

This new extension connects the DRC to neighbouring Tanzania and Zambia with onward connectivity to Liquid Telecom’s ‘One Africa’ broadband network fast approaching 70,000km. It is central to the company’s vision to create a single fibre network spanning the entire African continent – North to South and East to West.

“Liquid Telecom has connected East to West Africa with the most direct digital corridor across the southern hemisphere. We have set a new benchmark and achieved a historic milestone in our vision to create a more connected Africa,” said Nic Rudnick, Group CEO, Liquid Telecom. “By linking the DRC to Liquid Telecom’s rapidly expanding pan-African fibre network and the rest of the world, this transformative infrastructure is creating a foundation for digital growth. Fast, reliable broadband connectivity will advance society, fuel innovation and help champion pan-Africa trade.”

Sound infrastructure development has the potential to transform the prosperity and livelihood of the DRC population. In Kinshasa alone, for example, some of the city’s 11 million population will no longer have to rely solely on mobile broadband – they will have access to high-speed, reliable internet directly into their homes.

Similar outcomes will be available in other DRC cities along the route – collectively comprising
approximately 5 million citizens.

“What Africa has been lacking until now was a direct east to west telecommunications backbone. Liquid Telecom has achieved what African states and organisations have been contemplating for years without success. It deployed a high-capacity fibre optic backbone connecting subsea cables on the East Coast of Africa with cables on the West Coast of Africa. By doing this, it not only considerably shortened the communications route between East and West Africa and contributed to keeping the traffic local, but it also laid the groundwork for connecting millions of Africa’s citizens (especially in the DRC) to the internet and the world. This is a significant milestone in the continued expansion of modern telecommunications infrastructure across the African continent, supporting governments’ policies aimed at closing the digital divide within their countries and ultimately ensuring ubiquitous connectivity.” Said Dobek Pater Director at Africa Analysis.

“Bringing major continents closer together via the most direct fibre link connecting East to West Africa via DRC is history in the making,” said Nic Rudnick. “In 2018 Liquid Telecom launched a direct land-based fibre link between Cape Town and Cairo and in July this year, we started work on connecting South Sudan to the rest of the continent. By connecting East to West Africa via DRC with a direct land-based fibre link, more African cities, more communities and more businesses will have access to reliable and faster internet connections than ever, and many for the first time. This will bring proven economic and social benefits throughout the country, including vastly improved healthcare, education, social welfare and trade as we continue to expand Liquid Telecom’s ‘One Africa’ Broadband Network.”

Liquid Telecom’s latest fibre expansion connects the company’s network on the Atlantic coast at Muanda in the DRC, via Liquid Telecom’s international subsea cable partners. It then runs directly East to Kinshasa and through the DRC onto Lubumbashi in the South, connecting with other cities in between, including Kikwit, Kananga and Kolwezi. The link then crosses the DRC border into Zambia, integrating there with Liquid Telecom’s existing and rapidly expanding pan-African terrestrial fibre network.

THE GHOST HOUSES OF NAIROBI SUBBURB