With fierce determination and a passion for progressive change, Eimara Africa Resource Founder and CEO, Tina Nduta, is looking to transform the regional extractives and energy sector into a modern day industry. 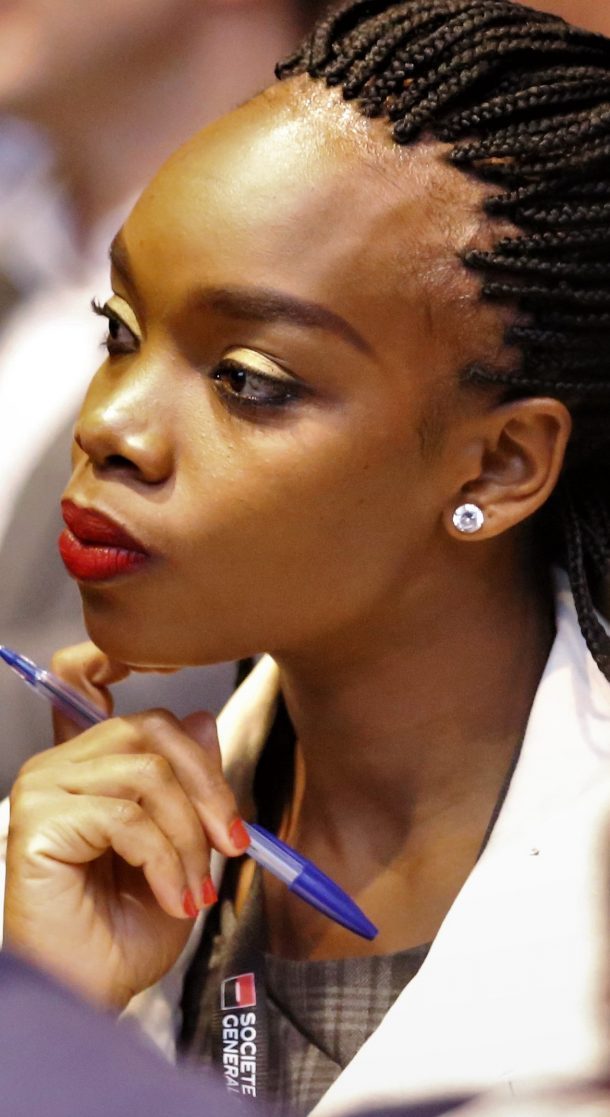 Tina Nduta started carving out a path for herself in the extractive sector at the tender age of 24, this is after a short journey of building a successful career in sales business, amassing great wealth of communication and marketing skills with three different Car companies in Kenya over the course of four years.

She then left everything behind to pursue her passion for the mining Business in Tanzania. Without any leads; she took a huge risk and dug into the deep.

“I got my first opportunity to venture into the natural resource development. I joined a start-up junior gold exploration which had set shop in Singida, Central Tanzania,” Nduta reveals.

With her extensive knowledge of the East African geology, her expertise in project financing, regulations for securities offerings in private placement to fund mining & energy resources and a strong work ethic in buying and selling gold for the Tanzanian Company which took her six years, an idea hit her.

“I later pitched the company with an idea of transforming its business model from trade gold into making an Exploration Company, with the Objective of acquire Gold Prospecting Concession undertake Exploration by using modern technologies to develop world class Gold Assets,” Nduta says.

The relentless Nduta would later in 2014 — having gained industry experience and inspiration by working with highly talented extractive professionals started Nairobi based Eimara Africa Resources.

Years later, her perseverance paid off, she has now built her own marketing agency, Eimara Resource Africa which is firmly entrenched as a player in the extractive industry.

Eimara Resources Africa, an advisory and market analysis Consultancy company, is positioning itself to meet the rising needs of companies in providing status and details on Policy & Regulation, Investments Business Environment, Tax & Incentives, Environment compliance, and the Cost of Doing Business.

“As an entrepreneur my motivation is to leverage modern technology to help bridge the gap in Capacity building in the Extractives and Energy Industries using data driven research,” she says.

Looking at the  Oil & Gas Industry in East Africa, Nduta notes that the industry has constantly evolved and it is progressing well despite being set back by negative  investment sentiment in 2016 and parts of 2017 when oil Prices process slumped into at all-time low.

“Development across the regions is on course. In Kenya the Early oil Pilot Scheme is already underway; Uganda is eying first crude by 2022. Elsewhere in Mozambique and Tanzania, both countries each separate are in talks with the International Oil Companies (ICOs) to finalize agreements on Building the Floating LNG Export Facilities which is key to Finalizing commercializing their respective LNG Resources,” she points out.

She is positive that East Africa’s Oil & gas is well Position to thrive citing the region Oil & Gas or Hydrocarbon basins are of rich quality.

“This the region relatively attractive to ICOs as due to the quality of the hydrocarbon basins make cost less to drill and extract, compared to other regions of the world for instant the arctic. Second East Africa is politically stable region, with high economic growth and relatively developed infrastructure,” she indicates.

She further indicates that the other key factor is that, East Africa Geographically is strategically well position to export oil & gas to Asia.

With Africa, despite being richly endowed with energy resource, Nduta notes that it also accounts for half of world’s Electrification deficit with a lot work that needs to be done by the private sector in collaboration with government to effectively manage the Continent mineral and Energy resource to benefit the African people.

This according to the Asian Development Bank estimates that the region will need to spend as much as 11 trillion dollars between now and 2030 to meet its bloated energy needs, “East Africa stands to greatly benefit from much spending,” Nduta alludes.

The region, in the last few years has been undertaking a great deal of Merger and acquisition in Oil & gas Space, with the recent acquisition of Ap Moller Maersk Kenyan oil Block assets by French For Total to a cost of $ 360 million Dollars, acquisition of BG Tanzania and Kenya oil assets by Royal Dutch Shell to the Merger between  Canadian Oil Company  Simba Energy and UAE’s Essar Energy.

Another merger on the Horizon that will touch on East African Assets is, Chevron’s bid to acquire Anadarko. Anadarko has Natural Gas Block’s in its Mozambique’s Rovuma Basin.

“East Africa has seen a flurry of activities in the space of oil & Gas. This in itself is a sign of confidence to investors as to the attractiveness of the region’s Oil & Gas Sector,” Nduta says.

She indicates that she is zealous on the development of the regions mining and Energy industry with the quality of their work and content earning them recognition in the Industry.

“I make frequent view column analysis on regional top publications in issues of Policy, investment and capacity.  I frequently engage with leaders of the industry on issues that matter to the development of this sector to hopefully impact on descion made for the benefit of the industry, be it in Local Content, investment or support our Young Oil & Gas professionals. Because for us is service to the Industry and the love for our great continent first above all else,” she says.

For a company operating and interacting with industry firms, Eimara has amassed a strong portfolio of partnerships.

“We work through Partnerships a lot. The right collaboration brings share shared value,” she says.

One of Eimara Resource Africa Partnership is with American based Environmental Chemical Corporation ECC, advanced and innovative technologies for Environmental Compliance in Mining and Oil & Gas.

“Our Environmental work covers a broad range including water treatment and geophysics technologies for preventing water geohazards. Others Include Environmental remediation, for example events of Oil spill clean ups or remediation after mine closures. Environmental compliance is hugely important to the Extractives industry, preserving our biodiversity, Climate change mitigating are all issues that we care about, because it directly  also impacts on our communities  and our Partnership with Environmental Chemical Corporation has  allowed us to  contribution in this very important aspect of the Extractives Industry  and on a larger Larger scope,” she says.

We are also working with the Canadian CSR training institute to bring the First Master plan Certified for measured social impact program.

“Our other valued partnership is with the European association of Geoscientist and Engineers (EAGE). I sit on the Technical committee for EAGE’s East Africa’s geoscience forum. The Forum provides a knowledge sharing forum between industry government and academia to build Capacity and share Technical knowledge Regional Geology, Geophysics and Exploration for Oil & Gas, Mining, Geothermal and other Energy resources.

With the non-profit European association membership of over 19,000 members, Eimara is actively looking to build shared valued partnerships.

The results speak for themselves, with barely a decade in the market, Eimara is set to launch an app later this year, which according to the CEO will be the next big thing for the extractive industry as well as boosting the firm’s services.

“We are not a decade old yet, we now have is a platform to influence the industry in a positive way, our success story is now on track to being written. It is just the beginning of what I hope will be a truly remarkable Africa product that is so Authentically Kenyan. Our Signature, Flagship Products is definitely technologically oriented, it is currently under development and we will be introducing it to the market at the end of the year,” she says.

Nduta’s extensive experience in the sector has earned her recognition across the region and was a finalist for the 2016 ‘Future Energy Leader Award’ by East Africa Power Convention Award (EAPIC); she is also the founder, Extractives and Energy Network Africa, a Nairobi based Consulting Firm.

She credits her success to the support of her Business partner Julius Osanjo, a Graphic designer with Information technology background, whose effort and contribution has helped transform and build Eimara brand to where it is today.

Going forward, Nduta’s role will inevitably involve more of educating the market; growing companies as well as developing the extractive industry and she has the expertise and passion to meet them head-on.

With an eye on the future of Eimara Africa Resources, the founder concludes that, the African continent is richly endowed with Natural resources presented to her with opportunity to build a dream company and a better future for her daughter.

Tina Nduta looks to be a testament that with hard work, passion and determination, dreams can be achieved right here in Africa as she has turned hers into gold.