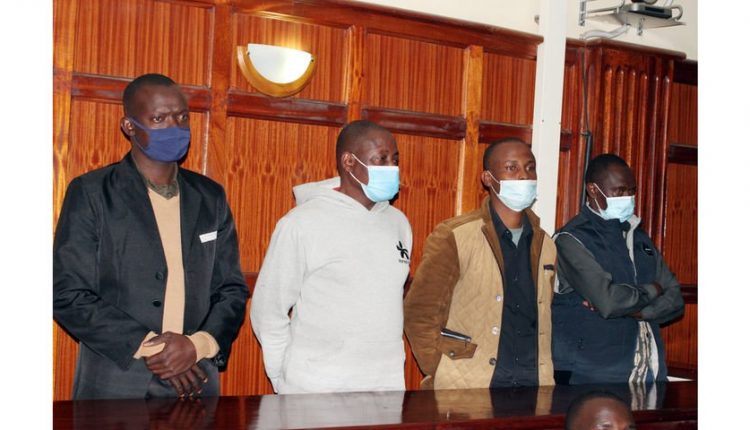 Four police officers attached to the Langata Directorate of Criminal Investigations (DCI) have been charged with violently robbing a United States-based businessman of Sh280,000.

Anthony Muvaka Mwanza, Cornelius Stephene Wambua, Tom Omomdi Otieno, and Kennedy Omondi Odero were charged with robbery with violence when they appeared in a Nairobi court on today.

The four were arraigned before Milimani Chief Magistrate (CM) Wendy Kagendo to face charges of robbing Vincent Ochieng Odembo of 40,000 shillings and $2,400 USD on February 6 at Nextgen Mall on Mombasa Road in Langata Nairobi County.

Defense lawyers led by Danstan Omari, Michelle Kimuma Omuoyo, Shadrack Wambui and Wycliffe Omayio informed the court that the accused and the complainant were trying to resolve the issue out of court adding that it was a misunderstanding between the accused and the suspects.

Mr Omari asked the court to release the four accused on reasonable bond terms arguing that they earn meagre pay especially after the monthly deductions. Consequently, the prosecuting counsel Anderson Gikunda did not oppose the release of the four suspects on bond.

In her ruling, Ms Kagendo said the accused face a capital offence punishable by a death sentence upon conviction and therefor the bond terms will be guided be guided by the severity of the penalty, which in this case is death upon conviction.

The CM Kagendo released each of the four accused on a bond of Sh500,000 each with surety or an alternative cash bail of Sh300,000.