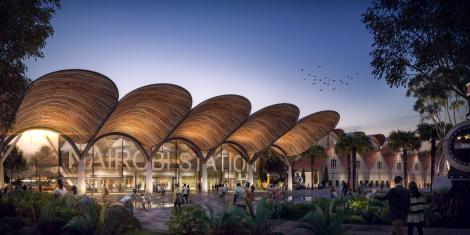 Kenya Railways, in a statement Thursday, May 19, stated that the mini-stations will be constructed in the Central Business Districts (CBDs) of the two towns in a bid to expand its services and ease congestion on Mombasa Road.

The corporation also opened up the tender for construction of the termini, inviting bids from prospective contractors.

The corporation will partner with the Kenya Defense Forces (KDF) and the National Youth Service (NYS) in its efforts to ease traffic congestion in the city.

setting up of the stations will see the inclusion of Mlolongo and Kitengela in the expanding railway network, it will also increase the passenger traffic, translating to more income for the parastatal.

The current commuter train runs from Athi River through Syokimau, Imara Daima, and Makadara and completes its journey at the Nairobi Central railway station.

Construction of the two stations will act to complement the Nairobi Expressway, which has reduced the traveling time between the Jomo Kenyatta International Airport (JKIA) and Nairobi’s Westlands area by more than one and a half hours.

In addition to the two new substations, Kenya Railways will build a third sub-station in Kibera. Kenya Railway is targeting thousands of commuters from the informal settlements, noting that the existing mini-stations are inadequate to handle the traffic.

On March 16, Kenya Railways announced it would be constructing several stations in Nairobi and the neighboring townships. Stopovers will be created in Mukuru Kwa Njenga, Mutindwa and Satellite.

Several  stops are to be set up at Dagoretti Market, Thogoto, Aviation, Gitaru, Kariobangi South, Mutuini, Membley, Kenyatta University and Madaraka next to Strathmore University. Lukenya and Konza towns will also get new stations.

The CBD terminus is also set for expansion to accommodate the new changes. Current routes plied by the railway include the Nairobi-Kibera-Kikuyu, Nairobi-Makadara-Embakasi Village, and the Nairobi-Githurai-Mwiki-Kahawa route.

Kenya Railways made available buses at the central station that ferry passengers to various locations in the city including Upper Hill, Westlands and Yaya Centre.